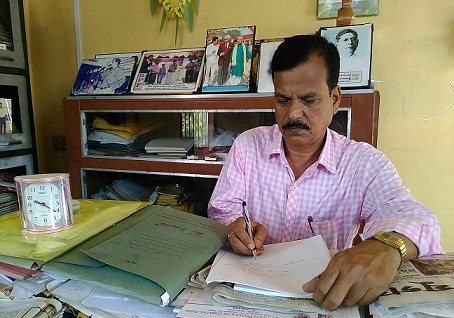 CRPC leader Sadhan Purkayastha going through the list of Bangadeshi inmates in Silchar Cetral Jail at his residence on August 31, 2018. Photo: Northeast Now

Citizens Rights Preservation Committee (CRPC), a human rights body formed in 1979 based in Silchar, has written a letter to Assistant High Commissioner, Government of Bangladesh, stationed at Guwahati, to deport 54 inmates locked up in detention camp in Silchar.

Lodged in Silchar Central Jail, the second home termed as ‘detention camp’, these 54 inmates have served their penal period having entered India illegally, now want to go back to their native places in Bangladesh.

CRPC secretary general Sadhan Purkayastha speaking to Northeast Now, said, “I have written a letter to the Assistant High Commissioner of the Government of Bangladesh based at Guwahati on August 29 to deport these 54 inmates. These inmates have served their punishment and are still languishing in Silchar Central Jail for more than three to four years of their punitive sentence. It is a gross human rights violation”

“We as an organization that has been fighting for human rights and providing justice to the commoners, have been able to deport 34 inmates from this jail back to Bangladesh two years back though with ample support from Kolkata High Commission of Government of Bangladesh and former Deputy Commissioner of Cachar S Viswanathan. A few months back, 54 Bangladeshi inmates in detention camps in Goalpara and Tezpur too had been deported after the opening of the Bangladeshi consulate in Guwahati, then, why can’t they facilitate the deportation of 54 inmates lodged in Silchar Central Jail,” Sadhan Purkayastha questioned.

“I have sent the Bangladesh consulate, names of this inmates as well as permanent address of their whereabouts in that country. These inmates too accept that they are Bangladeshis and want to go back to their homeland, sooner the better. The Assistant High Commissioner too has responded and has given a positive feedback to look into this matter at the earliest,” Purkaysatha added.

Clarifying more on this grave issue he said, “One point needs to be clear that these 54 inmates have been identified as Bangladeshis through judicial process and are not the same as that of one facing a foreigner’s tribunal. Those who are locked up in six detention camps in Assam, as per my personal view are mostly Indians. For example, Kajal Bala of Jirighat under Cachar district is inside Silchar’s detention camp for more than 18 months and case for her release is being fought in Guwahati High Court. CRPC is fighting for the release of bonafide Indian citizens who are declared as foreigners and likewise would help those who have confessed of being a Bangladeshi and want to go back home.”