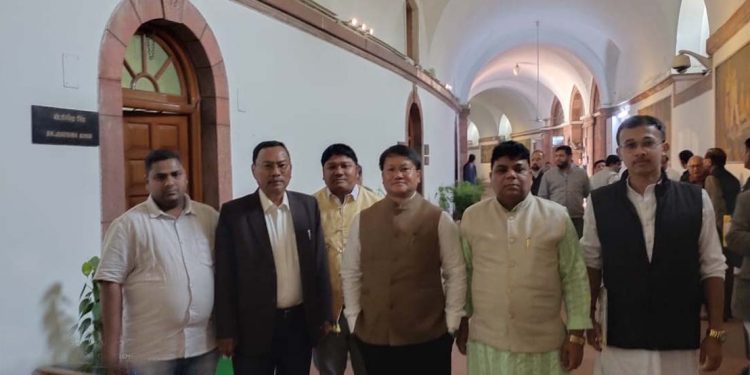 A view of the Congress delegation. Image credit - Northeast Now

A Congress delegation on Monday lodged a formal complaint to President Ram Nath Kovind and union minister for PMO against granting ST(H) status to the Bodo-Kacharis people living in 3 hill districts of Assam.

The delegation lodged the complaint a few days after the Centre’s announcement to grant ST(H) status for the Bodo people living in Karbi Anglong, West Karbi Angong and Dima Hasao.

A similar move of granting ST(H) tag to the Bodo-Kachari people in the hills of Assam was earlier opposed by different organsiations including student bodies.

The latest development, however, assumes significance as in the recently-signed third Bodo Accord, provision was made under Clause 6.1 for granting ST(H) status to the Bodos and the Kacharis.

“We will never accept the ST(H) status to the Bodos and Kacharis in the hill districts of Assam. They are already enjoying ST (P) status…giving ST (H) tag will destroy our demography,” said Dr Mongve Rongpi, secretary and spokesperson of the Assam Pradesh Congress Committee (APCC).

The delegation, however, said if the government grants ST(H) status to the Bodo-Kacharis “then Article 244 (A) should be implemented in Assam”.

Under Article 244 (A), there is a provision of creating a state within a state.

“There is a provision of creating a state within a state under Article 244 (A)…this will keep the rights of the Karbis and Dimasas of Assam,” said Rongpi.