Can “black-faced” Assam Cricket Association wipe-out the disgrace for “school-boy error” in Guwahati? 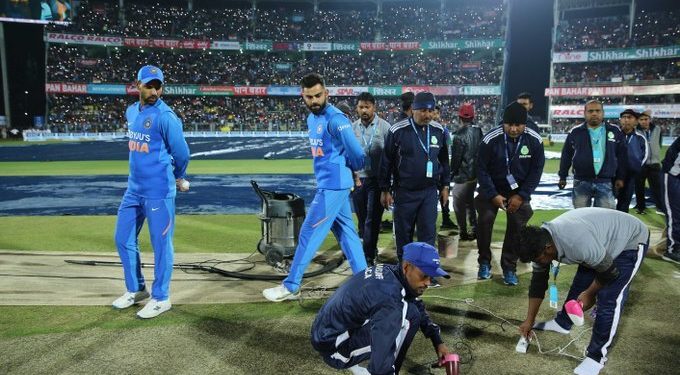 Hairdryers being used to dry up a soaked pitch on Sunday

The dream to transform Guwahati as the Sports Capital of India was humiliated on Sunday when India’s first international cricket match of 2020 was abandoned.

Television commentators termed the fiasco as a “school-boy error” as fans were kept waiting even after the covers came off at around 7:50 pm.

Commentators including Akash Chopra, Harbhajan Singh and VVS Laxman have slammed the Assam Cricket Association (ACA) for the “water leakage” into the popping crease.

The ACA officials were described as buffoons as grounds staff were seen using hair dryers, steam iron and vacuum cleaners to dry the popping crease.

Black-faced ACA secretary Devajit Saikia could not come up with any reason for the faux pas.

That the ACA was “totally unprepared” to host international T20 match was left exposed in front of the world.

It is surprising as to why Dr. Bhupen Hazarika Cricket Stadium in Guwahati was not prepared for the rains.

Around Rs 2300 crore of tax-payers’ money has been invested in building the stadium.

For last one week, the Met Department has been predicting heavy rains and thunderstorms in Assam.

Probably the ACA officials did not pay much heed to the weather forecast.

The organizers also forgot that Assam is subject to very heavy precipitation and that too, round the year.

Moreover, the stadium in Guwahati, which is the youngest cricket ground in India, does not have an aqua-soaker, popularly known as the super-sopper.

While the ACA always claimed that the 40,000 capacity stadium has all modern facilities, absence of aqua-soakers or the Supper Soppers exposed incompetence of the organizers.

Klorophyll (India) Sports Turf Technology & Construction Private Limited laid the cricket ground had claimed that the subsoil drainage system was designed to withstand cloudburst, and play could start within minutes of a rain stoppage.

It is obvious that the ACA officials will now shift the blame on the curators —Barsamangal Barooah and Ratul Das.

But the ACA officials should have learnt lessons of maintenance from the Cricket Association of Bengal (CAB) officials.

CAB officials have been maintaining the historic Eden Gardens at par international standards.

Even if it rains for four hours in Kolkata, the water is drained out in 20 minutes in Eden Gardens.

Eden Gardens, which is described as the Mecca of cricket is equipped with all the modern amenities.

There are zero-point grass cutters and four aqua soakers or super soppers in Eden Gardens.

The ACA officials should have arranged for total insulation of the popping crease.

Moreover, these days, Aqua-soakers or Super Sopper are available in India in the range of Rs 10 to 12 lakhs, which the ACA should have procured a long ago.

The ACA should not forget that the new stadium in Guwahati had just started getting international cricket matches, and it could have developed further as a Test Cricket venue as well.

Earlier, Guwahati had stopped getting matches after the BCCI had ruled out the old Nehru Stadium as a venue for international matches.