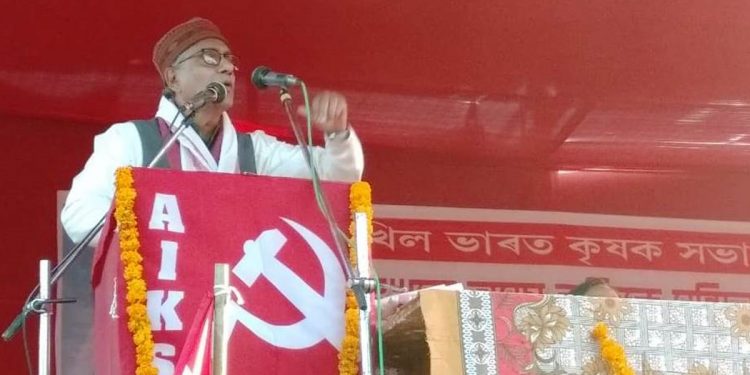 Sarkar also said the Act has been brought by the BJP-led government at the Centre to “disturb the cohesiveness of the Indian society”.

The ex-Tripura CM said this while addressing the open session of the 24th state conference of All India Kishan Sabha at Comrade Pramod Lahan Kshetra in Dhakuakhana under Lakhimpur district.

The three-time Tripura CM and one of the most revered politicians of India, Sarkar said, “CAA should be opposed to saving the unique social unity of the country.”

He also attributed the anti-farmer moves by the Centre like withdrawal of subsidies for the agrarian distress leading to the incidents of farmers’ suicides in the country.

The open session on the concluding day of the conference was also addressed by other senior Communist Party of India-Marxist (CPI-M).

A procession against CAA was also taken out on Monday by the organizers of the All India Kishan Sabha’s state conference at Dhakuakhana in Assam’s Lakhimpur district.

Thousands of people, including the delegates coming from various parts of the state, participated in the anti-CAA procession.

The three-day state conference of the All India Kishan Sabha began on Saturday at the campus of Mising Murang Ghar in Dhakuakhana.

The conference began with the hoisting of the flag by Jitendra Chowdhury, former MP and national convener of Gana Mukti Parishad (GMP), the tribal wing of CPI-M.

On Sunday, a delegates’ meeting was held in the conference with the welcome address delivered by former MP and veteran party leader Uddhab Barman.

The delegates’ meet had discussions on the CAA and demanded that the CAA be scrapped.

The meet also demanded that eviction of peasants be stopped, Assam’s flood and erosion problems are mitigated and anti-farmer land policies are scrapped.

The meet also demanded implementation of the MGNREGA in the state.

The mouthpiece of the All India Kishan Sabha’s state unit was released by Amiya Kumar Handique, a retired professor of Dhakuakhana College, on the occasion.