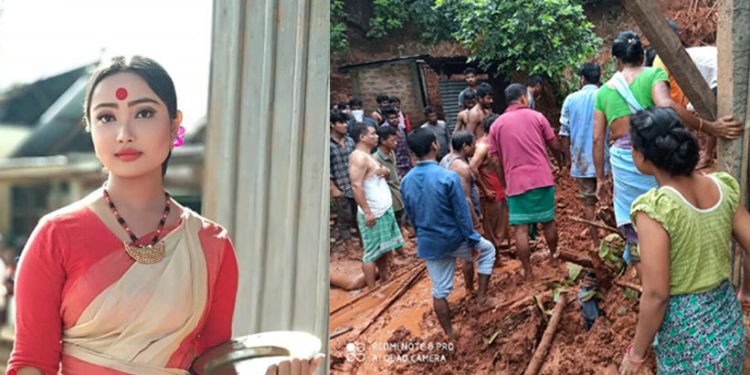 A young budding artiste of Assam lost her life in a massive landslide that took place at Kharguli area of Guwahati on Sunday.

The landslide took place at Hirimbapur region of Kharguli in the city on Sunday morning.

The landslide took the life of Priyanka Boro, aged around 21 years.

The incident took place at around 6 am on Sunday morning.

Priyanka was cleaning her house when large chunks of mud and soil eroded from the hills and crushed her below.

Notably, Guwahati has been witnessing incidents of landslide over the last couple of days because of incessant rain that is lashing the city.

Priyanka was an undergraduate student of Guwahati College.

Her body has been sent to Guwahati Medical College and Hospital for post mortem.

Notably, Priyanka secured the highest marks in music in the HSLC examination of 2015.

She was an expert in classical dance, folk dance, and Bihu dance.

She had received wide accolades and awards at both national and international levels.

She was scheduled to go to London to perform dance recital.

Meanwhile, a pall of gloom has descended in the entire Kharguli area after the tragic incident.