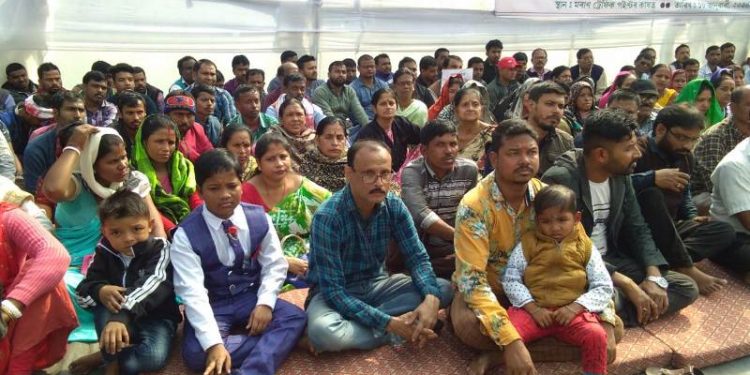 Around five hundreds peoples from Bengali Samaj of Moran participated in the protest.

There is a sizeable Hindu Bengali population in Dibrugarh and Tinsukia district.

The protest was organised by Greater Moran Bengali Samaj in association with several organisations in Moran.

The protesters holding play cards and banners raised slogans against the CAA.

The protesters demand for scrapping of the amended Citizenship law.

“We are the part of greater Assamese society born and brought up in Assam and working hand in hand with the other communities for the development of Assam.

Around five hundreds peoples from Bengali Samaj of Moran participated in the protest programme.

“Assam is our motherland because we are born and brought up in Assam. We are with our Assamese brother in every fight which is against our state. The government has forcefully imposed the act in Assam.

“Our Bengali Samaj vehemently opposed the CAA because the Act is ant-Assam and unconstitutional. Today, we have gathered here to protest against the CAA and demand to withdraw it,” said Kajal Das, another protester.

AJYCP vice president, Ranjit Changmai in his address while calling for the scrapping of the Citizenship Amendment Act also sought the implementation of Inner Line Permit (ILP) system in Assam like many north eastern states.

“Prime Minister Narendra Modi and Amit Shah should understand that the self-respect of the Assamese people can never be defeated. The people of Assam are never going to accept CAA.

“Moreover we need constitutional safeguards like ILP to secure the future of the locals. If Manipur and Meghalaya can get ILP why can’t Assam. The threats from external influx and internal migration cannot be avoided unless the state has a provision of the ILP system,” the AJYCP leader said.