Will not allow a single foreigner to settle in Nagaland: Anti-CAA protesters 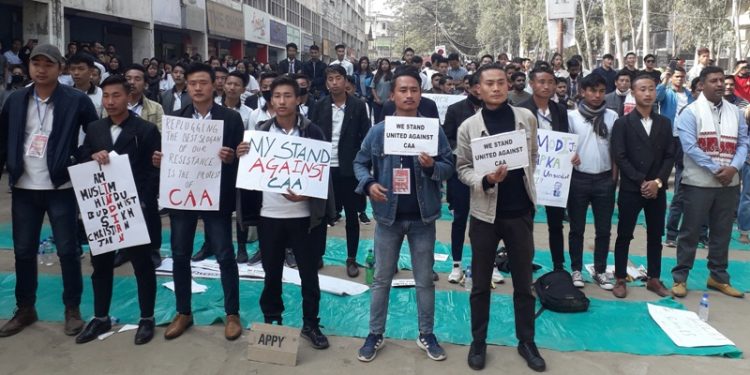 Students at a protest rally against CAA in Dimapur on Saturday.

Nagaland Against CAA, an uprising against the Citizenship Amendment Act (CAA) led by the Naga public, held a protest rally at Supermarket in Dimapur, demanding that the Act be repealed.

Various speakers at the rally raised concerns on the possibility of the indigenous people getting demographically overwhelmed and marginalised by illegal immigrants from outside the country because of the Act.

Nagaland has been excluded from the purview of CAA because of the inner line permit (ILP) that is in force in the state.

Dimapur district, which was earlier not under the ILP regime, was brought under the system on December 10 last year, a day before the CAA was passed in parliament.

Amid speeches by student leaders and civil society members, songs, skits and on the spot painting competitions based on anti-CAA theme were held during the rally.

A representative of Dimapur Gaonbura (village chiefs) Federation asked, “How can we accommodate outsiders when we cannot stand on our own feet.”

Vowing to oppose the CAA at any cost, he said the Nagas will not allow a single foreigner to settle in their soil.

“We want democracy, not CAA,” he said.

The Tenymi Students Union Dimapur described the CAA as an “organized crime”.

He said Assam is like the mother of Northeast. “If Assam goes, whole Northeast will go”, he said implying that if Assam is affected by the CAA, entire Northeast region will bear its brunt.

He also sought to know how can the Assam Accord and CAA on the same issue of illegal immigrants be implemented at the same time.

“Where is secularism under BJP government,” he asked.

He said the CAA is a real threat to the indigenous people of the Northeast and that it will reduce them to minority in their own land.

He said the people of the Northeast will continue to fight against the Act and will win.