While hardcore BJP supporters always campaign for beef ban across the country, a BJP-candidate in poll-bound Assam claimed that beef is the ‘National Dish’ of India.

Banendra Kumar Mushahary, BJP candidate from Gauripur constituency has been caught on the wrong foot for claiming at an election meeting in a Muslim-dominated area that ‘beef’ is the ‘National Dish’ of India.

“How can anyone try to ban beef? It is the National Dish of India,” Mushahary, who joined the BJP on December 29, last year, said, while trying to woo the support of the minority voters.

Mushahary said beef is an international dish, adding, “Educated Muslims in the rural areas of Assam should understand that no one can ban the sale of beef in Assam or anywhere in India.”

The Bodo leader is a veteran politician and was first elected to the Assam Legislative Assembly in 1996 as an independent candidate from Gauripur constituency in Dhubri district.

Mushahary was elected again as an Asom Gana Parishad (AGP) candidate in 2001 from Gauripur. Subsequently, he joined the Bodo Peoples Front (BPF) and was elected as an MLA for the third time in 2011.

Senior BJP workers in Dhubri district have raised serious questions on Mushahary’s statement at the election meeting in Gauripur, and demanded that the BJP candidate should immediately tender his apology.

Meanwhile, members of Purbanchal Hindu Aikya Mancha, on Tuesday, registered an FIR at the Dispur Police Station, and demanded that immediate actions should be initiated against Mushahary for violating the model code of conduct in poll-bound Assam. 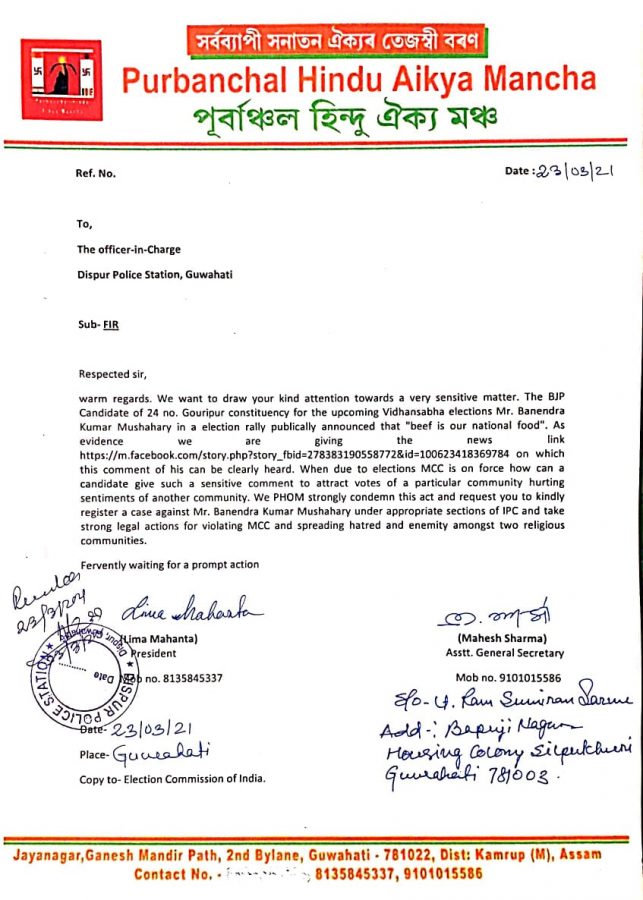