Singer Zubeen Garg was attacked by unidentified miscreants in the wee hours of Wednesday in Guwahati.

The incident took place near Ganeshguri at around 12.40 am while Zubeen was travelling to his residence located at Bhagadattapur, Kahilipara in the city from Red AV studio at Zoo Road Tiniali. 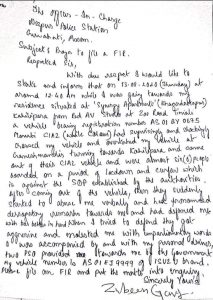 The singer lodged an FIR with the Dispur police in the matter.

As per the FIR, a vehicle bearing registration number AS01 BY 0675 (Maurti CIAZ) had overtaken Zubeen’s vehicle at Ganesh Mandir near Ganeshguri from where six people were there.

“They (the miscreants) hurled abusive and made derogatory remarks against me. They had beer bottles in their hands. They used un-parliamentary words when I tried to defend myself,” Zubeen stated in the FIR.