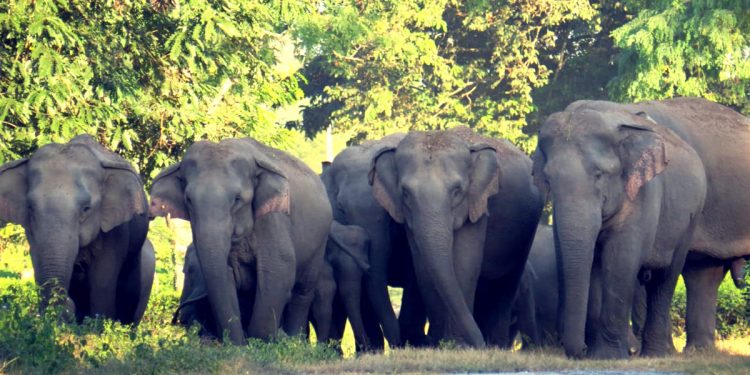 A herd of wild elephants which have descended down from the Indo-Bhutan hills at Bhutiachang Tea Estate in Udalguri. Image: Northeast Now

A herd of wild elephants, that descended down from the Indo-Bhutan border hills neighbouring Udalguri, entered villages including Orangajuli, Nonoipara, Segunbari, and Bholatar and wreaked havoc.

The villages fall under Nonai forest division in Udalguri district.

“The villages are being frequented by wild jumbos every night as a result of which the villagers are spending sleepless nights. Every year, the elephants come and spark terror in our village” said Tankeswar Deka, a resident of Borengabari village in Udalguri.

In two separate incidents, two persons were trampled to death by a wild jumbo in the district.

One victim has been identified as Maya Rani Das(90) of No. 1 Borengajuli near Nalapar and the other as Gandharu Orang (40) of No 2 Bholatar.

Speaking to Northeast Now, Nabajyoti Baruah a conservationist of Udalguri district, said, “The government have at large ignored the apathy of village.”

On questioned if electric fencing has proved effective, Baruah said, “Electric fencing are deployed in some areas of Khalingduar Reserve Forest and Bornadi Wildlife Sanctuary but lack of timely repairing has made them almost non-functional. ”

A forest official seeking anonymity said, ” We have less manpower but we are patrolling the areas. The villagers are also helping us to drive the elephants away.”

“This year there is a big herd which divide into 20-30  elephants and move in different directions we are having a tough time driving them away,” the official added.