The entrance of Assam University at Silchar. Photo: Aparna Laskar

The directive prohibits any dharna, rally inside the campus, without prior approval following widespread protests by 3000 odd students. It also prohibited any unauthorized reporting, with immediate effect. 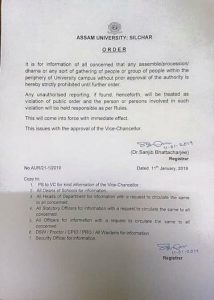 The students of the university backed by All Assam Students Union (AASU) had brought out a rally on Wednesday evening last, opposing the Citizenship (Amendment) bill. They sat outside the main entrance of Assam University in protest.

The directive issued by the university also stated that if anyone was found violating the orders, they will be held responsible according to the rules.

The order comes in the wake of Gauhati High Courts Senior Advocate and president of All Cachar-Karimganj-Hailakandi Students’ Association (ACKHSA), Pradip Dutta Roy asked Assamese Students to stay away from Assam University, if they continue to protest against the Citizenship Amendment Bill.

Since the Lok Sabha passed the Citizenship (Amendment) Bill on January 8,that rocked the state of Assam, a debate has been raging on the issue all over.