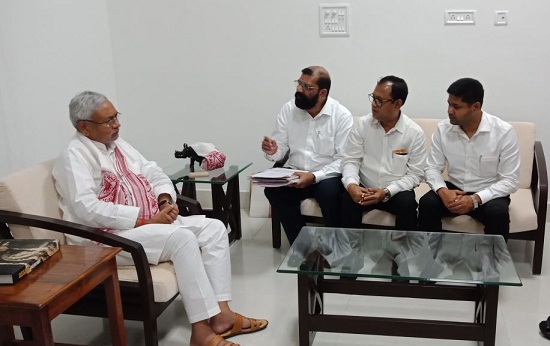 A delegation of All Assam Students’ Union (AASU) led by its adviser Samujjal Kumar Bhattacharyya along with president Dipanka Nath and general secretary Lurin Jyoti Gogoi called on Bihar Chief Minister and Janata Dal (United) president Nitish Kumar on Wednesday seeking his support for immediate withdrawal of the Citizenship (Amendment) Bill 2016 at his residence in Patna.

The delegation also submitted a memorandum with various documents supporting the demand to withdraw the Bill.

Addressing a press conference in Guwahati on Thursday AASU adviser Samujjal Bhattacharyya informed that the Bihar chief minister Nitish Kumar had said in a secular country citizenship cannot be given on the basis of religion.

“India is a secular country. Citizenship cannot be given on the basis of religion in India. The Assam accord should be implemented as soon as possible as the indigenous people of Assam are facing identity crisis due to the BJP-led Central government’s move to bring in illegal Hindu Bangladeshis by implementing the Bill,” Nitish told AASU delegation.

The delegation also sought support in providing constitutional safeguard to the indigenous people of Assam on the basis of Assam Accord, to seal the Indo-Bangla border and to make a bilateral agreement between India and Bangladesh to identify and deport the illegal foreigners for Assam.

AASU adviser Samujjal Bhattacharyya informed that Nitish Kumar supported the proposal to denounce the Citizenship Bill and said that he would dash off a letter to Prime Minister Narendra Modi by informing the demands of AASU.