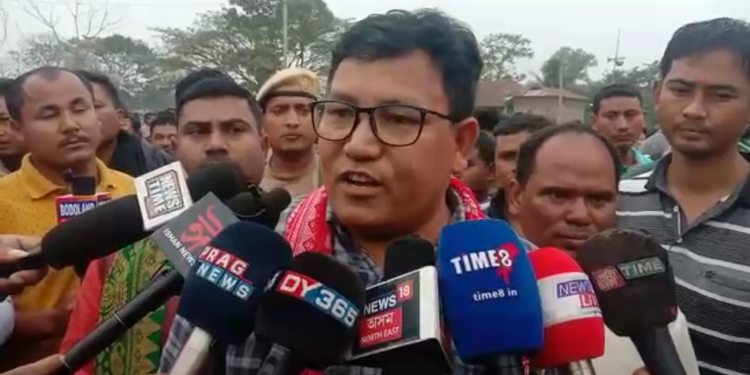 The political equations of Bodoland Territorial Council (BTC) may witness a major change in the forthcoming council polls.

If sources are to be believed the Bharatiya Janta Party (BJP) is batting to forge a pre-poll alliance with United People Party Liberal (UPPL).

If this happens, it will make the going tough for BJP’s existing ally, the Bodoland People’s Front (BPF) at Dispur.

The saffron party which is excited to spread its tentacles in the Bodo belt was on a look out for opportunity by a local party which would provide them a red carpet welcome in the Bodo belt and both UPPL and BPF whichever meet BJP’s demand of offering maximum seats is likely to be its partner which is a win-win situation for BJP.

The BJP currently has only one member in 45 member council seats of BTC headquarted in Kokrajhar, where elections are held for 40 seats while the rest are nominated by the Governor from the communities which are not least represented

BPF party president and BTC chief, Hagrama Mohillary also seems confident of its alliance going well with BJP and Asom Gana Parishad (AGP) and has already announced the list of its 16 candidates in the 40 member council polls.

Mohillary have also claimed before media that BJP-AGP-BPF alliance will form the next government in the BTC council.

The UPPL has gained momentum ever since Promod Boro the former ABSU leader one of the core signatories of the Bodo pact signed on January 27 last stepped down to join the UPPL as its working president and in a span of three days was elevated as its president.

UPPL is likely to take major advantage of the popularity of Boro to woo the young voters who are for looking for a new ray of hope of good governance and better administration in the BTC where the BPF is ruling for its third term.

If inside sources of UPPL are to be believed BJP leaders are already in talks with the UPPL leadership to float an alliance and contest the council polls on seat sharing where BJP is batting to contest in at least 12-15 seats.

President of United People’s Party Liberal (UPPL) Promod Boro has also indicated a possible alliance of his party with BJP for the BTC election.

“We have not got any proposal yet. We will think over it if we get the proposal,” he said.

“Our party’s sole aim is ensuing peace,prosperity,brotherhood in the Bodo belt and implementation of the clauses of the Bodo pact in letter and spirit and what would be better than an alliance with the ruling party in Centre and Union” said another UPPL leader on condition of anonymity.

Assam BJP president Ranjit Kumar Dass recently said his party was keen on expanding its footprint in the BTC areas and the party is open to float alliance with any party.

Mangaldai Lok Sabha MP, Dilip Saikia addressing a party workers meet at Anand bazar in Baksa recently also claimed that BJP will form the government in BTC council polls and the Bodo belt is facing a wave of anti-incumbency from the ruling party.

Meanwhile the  four factions of erstwhile insurgent group National Democratic Front of Bodoland (NDFB), which were among the signatories of Bodo pact have also witnessed demarcation among themselves as the NDFB (Ranjan) ,NDFB (Progressive) and NDFB (Saoraigwra) faction are most likely to lend their support to ruling Bodoland People’s Front (BPF) while the NDFB faction led by Govindo Basumatary is likely to back UPPL.