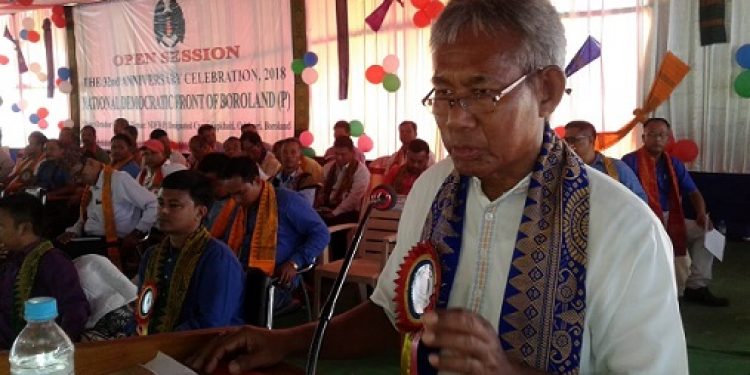 The ceasefire agreement signed by the National Democratic Front of Boroland (Progressive) with the Centre is nearing completion of 13 years, but the NDFB (P) leaders are determined that their struggle for a separate Bodoland State would fear fruit.

The leaders of the NDFB (P) raised the statehood demand again while addressing an august gathering of nearly 7,000 people at a conclave organised on the occasion of the 32nd Raising Day of the outfit at Sapekhaiti designated camp in Udalguri district on Wednesday.

The programme begin with the president of NDFB(P), Dhiren Boro, hoisting the flag of the outfit.

Speaking on the occasion, general secretary of NDFB (P), Govinda Basumatari alias B Swmkwr alleged that the present BJP Government has ‘betrayed’ them by ignoring the struggle of the Bodos.

“In the name of peace talks, the BJP Government at the Centre has pushed our demands into the cold storage which has exposed its hollow promises,” said Basumatari.

He further stated that the outfit would not rely on the false promises until and unless the Government takes a Cabinet decision for their demand.

“We will continue our struggle but with a new momentum,” he added.

Attending the programme as chief guest, the general secretary of National Federation for New States, S. Sanyal stated that the struggle of the community for the long period will bear fruit.

“The Government for these long years has not only deprived the community but has betrayed it,” said Sanyal.

Speaking on the occasion as appointed speaker, ABSU president Promod Boro said that the Government through its dilly-dallying tactics, delaying the peace talks with the rebel groups but rather it should adopt a strategy for the small ethnic groups which have been struggling for promoting and preserving their language, tradition, culture.

The assistant publicity secretary of NDFB(P), B. Bodosa also addressed the event.

The mouthpiece of the outfit ‘Udangsri’ was released on the occasion by Bodo Sahitya Akademi awardee Nabin Malla Boro.

It may be mentioned that the NDFB was formed in 1986 with the main objective of forming a ‘sovereign Bodoland’ and after 19 years of armed struggle, the NDFB (P) signed a ceasefire agreement in 2005 and participated in the peace talks.