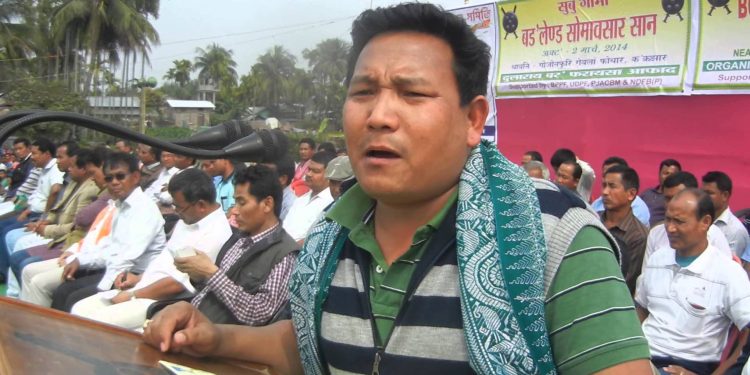 Boro joined UPPL at the two-day long convention of the party in Bijni of Chirang district, 147 kms from Guwahati.

Boro was appointed the working president of the party soon after his joining.

His foray into politics is expected to shape up the dynamics of the Bodo belt ahead of the ensuing Bodoland Territorial Council (BTC) polls scheduled to be held in mid-April.

The party is led by former Rajya Sabha MP, Urkhao Gwra Brahma who earlier made a clarion call to Promod Boro to join UPPL.

The fresh inductions in the party also witnessed joining of some former ABSU members.

The UPPL is being deemed as a major opponent for the ruling Bodoland People’s Front (BPF), an ally of BJP.

It was backed by the ABSU and the National Democratic Front of Boroland (NDFB ) in the last 2015 BTC council polls where the UPPL had field its candidates in 15 seats and won seven seats and was leading the second position in eight other constituencies.

The Bharatiya Janata Party (BJP) on the other hand is also on a mood of seat-sharing in the polls and is yet to make any formal declaration.

Sources in the BJP said the party is making grassroots level survey with the help of its karyakartas (workers) across the four districts of Kokrajhar, Chirang, Baksa and Udalguri for gaining the prospects of the party and mood of the population.

“We will hold a meet in Guwahati on or before February 25 where the party leaders including state president Ranjit Dass along with Assam cabinet minister Himanta Biswa Sarma will decide the fate of the party as to the number of candidates it will field in the BTC polls” said a BJP leader of Udalguri who is also in fray for contesting the polls.

Earlier, attending a welcome ceremony held at Dimakuchi in Udalguri district on Thursday, the former president of the ABSU, Promod Boro had opined a crucial political decision could be taken in the grand convention of the UPPL in Bijni regarding participation in the ensuing BTC election.

He said, “Right now we have not come to a political understanding with any political party but a concrete decision could be taken in the political convention in Bijni.”

Boro said, “Politics is not our sole aim but our target is to implement all the clauses of BTR accord in letter and spirit, to establish permanent peace and stability in the region and to develop the communities in all spheres.”

He said they were indebted to fulfill the people’s aspirations who supported the democratic movement for the cause of development.

UPPL supremo Urkhao Gwra Brahma said, “Promod Boro joined the UPPL today at the two-day UPPL convention in Bijni that will conclude on Saturday and Promod Boro has been appointed as the working president of the UPPL.”

Brahma also opined that the adding of the beloved ABSU leader is sure to bolster the UPPL party.

“For sure it will impact the election. The ABSU was one of the key signatories of the Bodo pact signed on January 27 Accord,” he said.

Meanwhile, the general secretary of NDFB (S), B R Ferenga said the stakeholders of Bodo pact would participate in the BTC council polls to ensure implementation of the clauses of the accord.

He, however, said the four factions of the NDFB had not come to an understanding with any political party but it is clear that they would tie-up with a party which would ensure certain sureties.

NDFB (Progressive) president Gobinda Basumatary said, “The prime objective of UPPL is to expedite the overall development of the BTAD by taking into confidence all the stakeholders irrespective of caste, creed, community and religion.”

“The stakeholders of Bodo community including the signatories of Bodo pact are committed for the development of the Bodo belt,” he said.