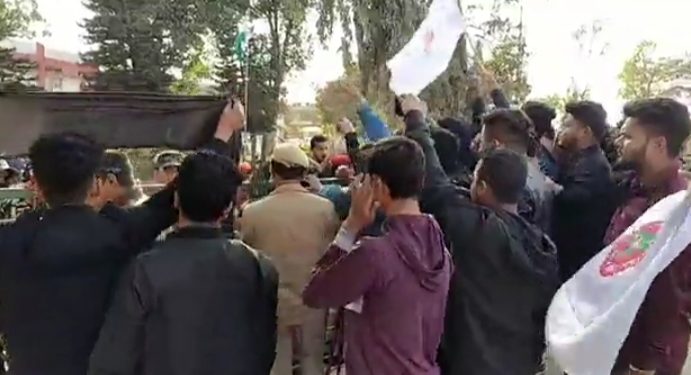 Union minister Rameswar Teli and Dibrugarh BJP MLA Prasanta Phukan were waved black flags by AASU activists at Dibrugarh circut house when a meeting of the saffron party was going on there on Friday.

Hundreds of AASU activists assembled in front of Dibrugarh circuit house and waved black flags at them and chanted slogans against the BJP government.

The anti-CAA protesters have been using the ‘black flag’ as a symbol of protest against the BJP leaders.

Recently, in many places the BJP leaders and members were showed black flag by the anti-CAA protesters.

Former president of Dibrugarh district BJP, Indra Gogoi said, “We organised a meeting was discussing how to develop Dibrugarh. The protest is against the Development because our main intention is development and if anybody want to disrupt the meeting then it has been proved that the organisation is against development.”

On the other hand, AASU members said that BJP had organised a party meeting at Dibrugarh circuit house.

“We showed black flags to Union minister Rameswar Teli and other BJP leaders in protest against CAA. We demand the government to repeal the Citizenship (A) Act, because the act was anti-constitutional and against the secular fabric of the country,” Sankor Jyoti Baruah, AASU district president said.

Earlier, both the leaders were faced the wrath of anti-CAA protesters during anti-CAA movement.

The protesters also pelted stones at Prasanta Phukan’s residence during the anti-CAA movement.

Chabua MLA Binod Hazarika’s house was also burnt down during the anti-CAA protests.

Dibrugarh SP Sreejith Tiraviam said, “We detained the AASU activists and latter they were released.”