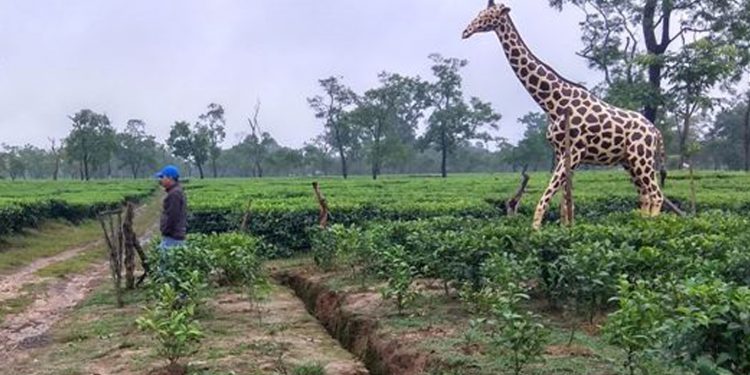 A tea-estate in Assam’s Golaghat district, in an attempt to keep wild jumbos at bay and protect its crops, has installed life-size models of giraffes.

The Dholaguri Tea Estate in Golaghat, in the recent past, has faced a severe onslaught from wild elephants.

To mitigate this onslaught and protect the crops of the estate, the management has installed three giraffes made of fibre.

The more than 700-hectare tea estate is close to the Nambor-Doigrung Wildlife Sanctuary and local conservationists have pointed out that it falls on the route used by the elephants to get to the paddy fields.

“Elephants visit at least two-three times a week. While they haven’t harmed humans, they destroy the crop,” reported Hindustan Times quoting Utpal Goswami, the manager of the estate.

The giraffes, which cost Rs 50,000 each, were made at Sonapur on the outskirts of Guwahati.

Authorities have reported that on seeing the giraffes, the jumbos changed their path.

Bhaskar Deka, divisional forest officer, Golaghat, is of the view that this change in the path of the jumbo is a temporary psychological barrier and they would soon figure out the dummy giraffes.

He suggests creating small plantations and wetlands in the premises tea estates for minimising the conflicts.

“The elephants could take shelter in these wetlands and the conflicts could be minimised,” he said.