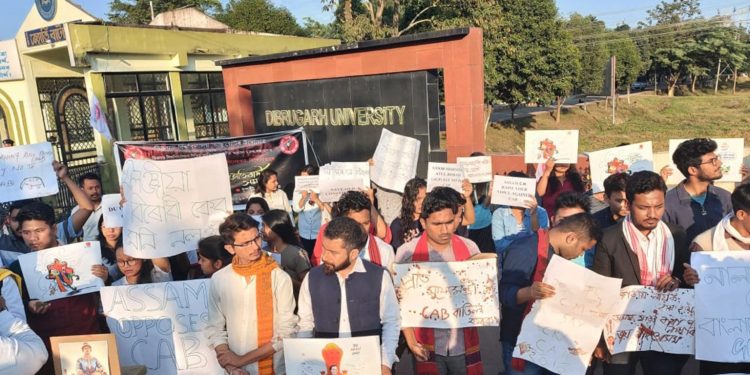 Marking a protest against CAB, the Dibrugarh University Post Graduate Students’ Union (DBPGSU) has banned the entry of Assam CM Sarbananda Sonowal and other BJP leaders into campus.

Members and supporters of the union also held a cycle rally in Dibrugarh against the proposed Citizenship (Amendment) Bill (CAB).

DBPGSU general secretary Rahul Chetri said that they have banned the entry of CM Sarbananda Sonowal and other BJP leaders into the Dibrugarh University (DU) premises.

“They have betrayed the people of Assam,” Chetri added.

AASU leaders will meet the union home minister Amit Shah in New Delhi on Tuesday to discuss the bill and convey their “strong” opposition.

“We appeal to the student community of Assam to unitedly raise their voice against CAB,” Chetri further said.

“If this Bill is passed then it will prove a death knell for the people of Assam,” he added.

The BJP-led government in the state has been facing a huge backlash for it’s stand in support of CAB.

The bill seeks to grant Indian citizenship to persecuted non-Muslim immigrants of Bangladesh, Pakistan and Afghanistan who migrated to the country till December 31, 2014.