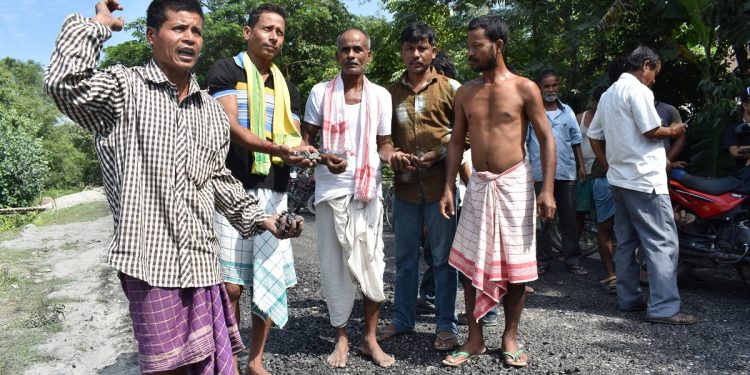 The construction work of the stretch from Charanpara village to Dalanghat in Tangla-Mahaliapra road in Assam’s Udalguri has raised several eyebrows over poor quality.

The foundation stone of the road was laid on June 2 last by Sipajhar legislator Binanda Kumar Saikia and Kalaigaon legislator Maheswar Baro.

The road which falls partly in Darrang and Udalguri was lying in dilapidated condition for more than a decade.

But, locals had heaved a sigh of relief following the reconstruction work but contrary to keeping upto people’s aspirations, the construction company have allegedly used minimalistic materials in unholy nexus of PWD officials.

They have allegedly ignored the quality part largely, resulting in poor construction of the road.

The aggrieved locals strongly voiced against the poor quality work and demanded attention of the authorities and government.

On a visit to the site, this correspondent witnessed as how the black topping carpet in Mahaliapara area laid on the night of October 18 have started deteriorating and comes out with a stroke of hands.

A resident of the area, Tibra Rabha, showing the damaged portion of the road expressed strong resentment and blamed the State Government and Bodoland Territorial Council (BTC) for giving free hand to such construction companies.

Another local, Lohit Nath said we protested for more than decade to draw the attention of the government, but if such is the level of development, then we don’t need it.

“It is a sheer misappropriation of public money,” he added.

Another villager, Shravan Prasad Sarma also came down heavily on the State Government and PWD officials.

Sources said Rs one crore was sanctioned by the Assam Government for the work.