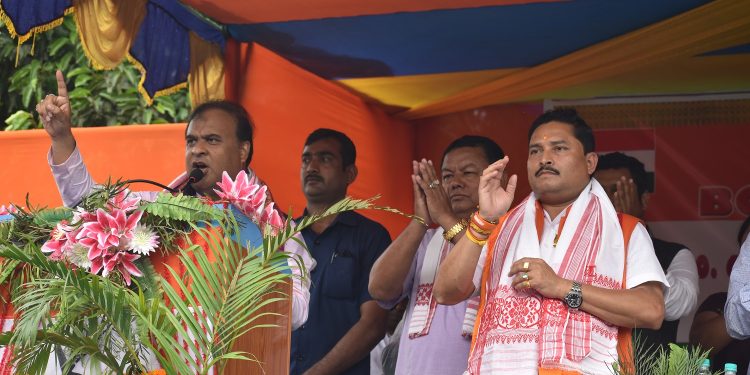 Assam finance minister and one of the star campaigners of Bharatiya Janata Party (BJP) for 2019 Lok Sabha polls, Dr Himanta Biswa Sarma addressed a mamooth rally at Chengapathar near Kalaigaon in Udalguri district of Assam on Tuesday.

Dr Sarma expressing his gratitude towards Bodoland People’s Front (BPF) and Asom Gana Parishad (AGP) who have extended their support towards the BJP candidate of Mangaldoi HPC,Dilip Saikia and have been carrying out hectic campaigning in the constituency.

Addressing a massive, enthusiastic crowd at the remote village, Sarma said Udalguri with other three districts of BTAD has now become an epitome of peace and development.

“Under the able leadership of Hagrama Mohillary led BPF, the BTAD areas witnessed unprecedented growth and development.” he said.

Sarma further observed that it is traditionally observed that when a new government completes first term of five years there seems to be lot of unfulfilled expectations and people criticize the government and even politicians lose popularity but contrary to that Prime Minister Narendra Modi’s popularity has grown by leaps and bounds after the completion of first term which has witnessed slew of development activities.

Lambasting the Congress, Dr Sarma said, “In 26/11 attack hundreds of innocents lost their lives by the Pakistan sponsored terrorist outfits, but the then Congress government despite having necessary defence machinaries didn’t take any step to combat terrorism or give Pakistan a befitting reply, but under the dynamic leadership of Prime Minister Modi, India gave a befitting reply and honour to the Pulwama martyrs including Assam son, Maneswar Basumatari by launching attacks by 16 fighter jets in Balakot province of Pakistan.

He further symbolically observed that the one tola gold scheme to brides of the state will turn Assam into a ‘golden state’.

Earlier BJP candidate, Dilip Saikia in his speech stated that the nation has witnessed a phase of renaissance in development.