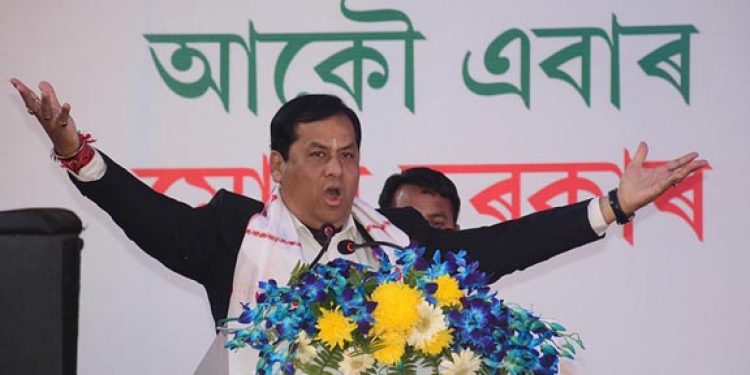 With the aim of galvanising its support base for the upcoming Lok Sabha polls, the Bharatiya Janata Party (BJP) on Thursday organised a mass rally at the Chowkidinghee playground here on Thursday.

Addressing party workers, chief minister Sonowal announced that they would win 12 Lok Sabha seats in the state in the upcoming Lok Sabha polls.

“We are going to win minimum 12 seats in the state in the 2019 general elections. People will vote for BJP for good governance. We will win with a thumping majority and form the government at the Centre for a second term under Prime Minister Narendra Modi. Our party believes in the mantra of collective efforts and inclusive growth (Sabka Saath Sabka Vikas) for the progress of the country. We have to move forward together to fulfill our dream of a strong and resurgent India,” Sonowal said.

“Moreover, we made the Assam Public Service Commission (APSC) corruption-free and transparent. Earlier, the Congress government were involved in corruption in the APSC exams. During our tenure, we have given appointment to 55,000 people in a complete transparent process. We have delivered in our commitment in making our state corruption-free and economically strong,” Sonowal added.

He also paid tributes to the martyred CRPF jawans of the Pulwama terror attack.

“Our booth level workers should work hard for the party to bloom the lotus again in Assam. In the last five years under the leadership of Prime Minister Narendra Modi, we have worked hard for the development and for the poor people we have introduced many schemes,” Singh said.

He said the party workers will have to work hard for the party because just one-and-a-half months left for the election.

Coming down heavily on the Congress, Singh said, “In the last 70 years of Congress rule, they have done nothing for the people but in our last five years, we have introduced schemes for every section of the people. Congress has divided the country for their own benefit and created chaos in India. Bharat is one of top most countries in ancient times but under 70 years of Congress rule they have diminished everything.”

Addressing the huge gathering, Northeast Democratic Alliance (NEDA) convener and state finance minister Himanta Biswa Sarma said that they should take oath to bring BJP back in power in New Delhi under Prime Minister Narendra Modi because PM Modi is working tirelessly  for the development of the country.

“PM Narendra Modi is taking blood step to root out militancy from Jammu and Kashmir. Recently we have lost our jawans in terror attack in the Kashmir valley. We don’t want Assam to become next Kashmir. The condition of Assam is dangerous because sudden demographic change has witnessed in Assam, 14 districts of Assam where once indigenous people were majority, now have become minority in their own land. The illegal Bangladeshi Muslims have become majority in the districts. Different cultures have been growing in the name of Neo-Assamese in Assam,” said Sarma.

He said that after the Pulwama incident some traitors are raising ‘Pakistan Zindabad’ through social networking site like facebook. “In lower Assam these traitors are working in behest of Pakistan as Pakistani agents and want to grow Pakistani culture in Assam but we will not give them to fulfill their nefarious act,” said Sarma.