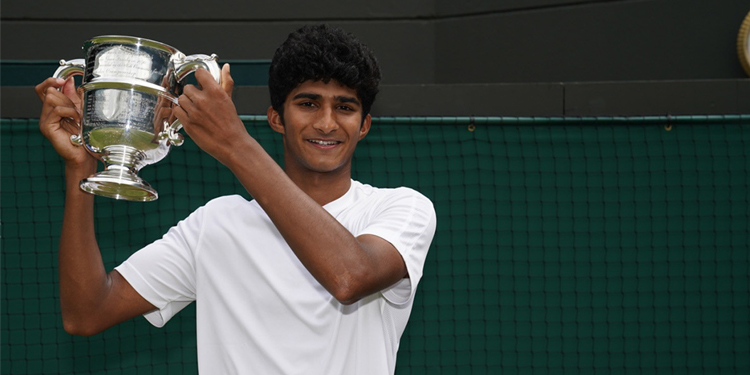 Indian-American Samir Banerjee, having roots in Assam, won the junior Wimbledon title after defeating Victor Lilov in the boys’ singles final at the All England Club on Sunday.

He became the first American to lift the junior Wimbledon title in six years.

Banerjee, who started his professional tennis career last year, lives at Basking Ridge in New Jersey while Lilov is from North Carolina.

So far, the American teenager has had a stunning start to his journey on the ITF tour as he has won 5 titles so far.

He reached the final of 10 of the 17 tournaments he has featured in so far.

“On one hand, Samir’s achievement is very inspiring for the Indian tennis fraternity and aspirants from our country. It’s very convenient to claim he’s of Indian origin and this and that, but the fact is, he’s an American. That’s how we need to look at it,” Gary O’Brien, an All India Tennis Association (AITA), said.

“You may claim his Indian origin, but I think India has not contributed even 0.1 per cent to all his efforts, success and growth. So I don’t think we should take any credit whatsoever,” he added.

Earlier, Samir Banerjee stormed into the finals of boys’ singles at Wimbledon after defeating Sascha Gueymard Wayenburg from France in the semi-finals by 7-6, 4-6, 6-2.

Samir’s father Kunal Banerjee is a financial consultant in the US.

However, Samir’s roots trace back to Assam.

Samir’s grandfather, Hiranmay Banerjee, was a resident of Assam and served as the General Manager at Oil India Limited (OIL), which has its headquarters at Duliajan in Assam’s Dibrugarh district.

Kunal and Usha met each other in the United States and eventually tied the knot.

Samir and his elder sister Divya were born in the United States.