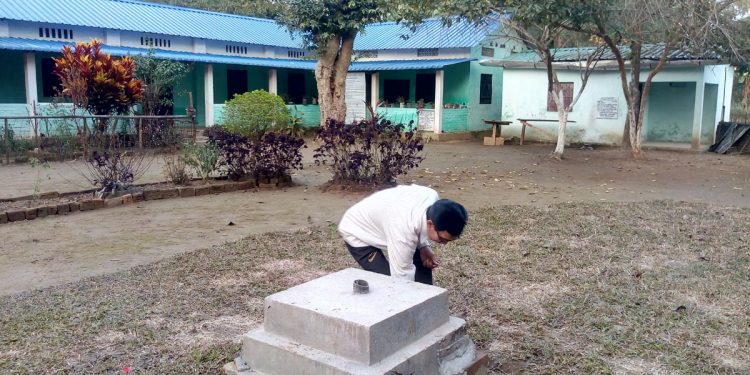 Preparations for Republic Day celebrations under way at the Bogdung Parishami LP School at Jeraigaon, the ancestral village of ULFA-I chief Paresh Baruah

Chabua MLA Binod Hazarika said that ULFA-I commander-in-chief Paresh Baruah should shun the path of violence and join the mainstream for talks to resolve their issues.

Binod Hazarika said, “ULFA-I should stop boycotting the Republic Day and Independence Day celebrations. They want to assert their power by doing so.”

“He said that the mindset of the people has changed and they are now coming out to celebrate Republic Day and Independence day in Chabua.

“I appeal to ULFA-I commander-in-chief Paresh Baruah to discard the demand for a sovereign Assam and come to talks with the Union government, which is always ready for a dialogue,” the MLA said.

The national flag will be hoisted in schools, colleges, government offices and panchayat offices in Chabua as part of the Republic Day celebrations on January 26.

“People should not fear and comes out to celebrate Republic Day. Our government is prepared to tackle any kind of eventuality,” Hazarika said.

People in Jeraigaon, the ancestral village of Paresh Baruah, are however going to celebrate the Republic Day.

“We believe in the spirit of nationalism. Our village has produced several footballers like Babul Phukan and Reboti Phukan who have brought laurels in the national level. Every year we celebrate Republic Day and Independence Day,” Kishor Chetia, a young villager of Jeraigaon said.

“We always hoist the national flag on Republic Day and Independence Day every year,” said  Dilip Baruah, principal of the school.

“After the Dhemaji bomb blast, everybody feared to celebrate these days, but now school children and the elderly join in the celebrations,” he said.