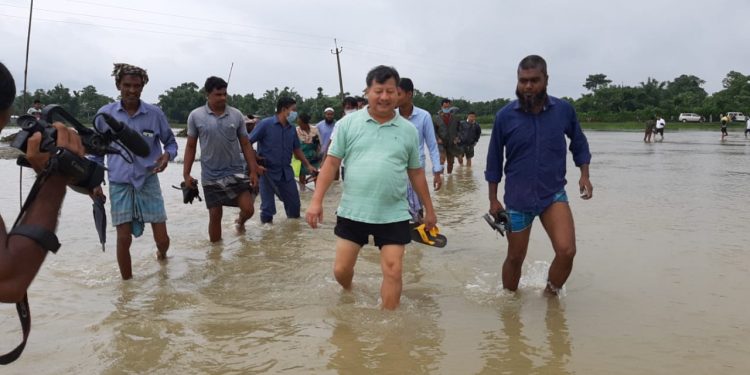 Some parts of Assam’s Chirang district under two revenue circles were reeling under floods following incessant showers over the past few days.

He took stock of the problems of flood hit people during their hard time.

Assessing the situation and damages, the minister on the spot ordered the district administration to initiate immediate steps for extending possible assistance to all affected people by providing sufficient food items, medical care, as well as fodder and medicines for their animals.

He lauded the role played by the SDRF personnel for timely evacuating the affected people from the marooned areas.

As directed by him, medical teams led by joint director, Health Services rushed to the relief camps and provided medical facilities to the needy people.

As reported by the Chirang District Disaster Management Authority, till Saturday evening, flood waters have affected 13584 people, 22 villages and 5320 animals in Sidli and Bijni revenue circles.

For these affected people the district administration has opened nine relief camps, where in 1152 people are presently taking shelter.