The Kokrajhar District Committee of the All Bodo Students’ Union (ABSU) has denied its involvement in harassing minority community people in the name of NRC as alleged by the AAMSU.

The ABSU made its stand clear regarding the allegation by the All Assam Minority Students’ Union (AAMSU) during a press conference in Guwahati on Saturday that the ABSU was “conspiring against the minority community” at a time when the NRC update process is going on.

A press release issued by Swmdwn Brahma, general secretary, Kokrajhar District Committee of ABSU, on Sunday stated: “The Kokrajhar District Committee, All Bodo Students’ Union, in response to the press meet made by Central Committee of AAMSU on 4th day of May, at Guwahati, regarding the objection raised by some person who targeted a family of minority community believing him to be a suspected Indian national, the Union makes it clear that the Union has no such intention of harassing any common people, community, caste, creed and sex in the name of NRC objection process who are genuinely a citizen of India.” 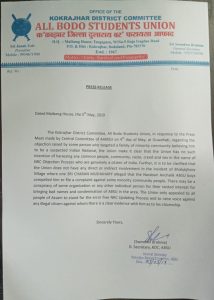 Brahma also clarified that the “union does not have any direct or indirect involvement in the incident of Bhalukjhora village” where one Charan Mushahary alleged that the “Narabari Anchalik ABSU boys compelled him to file a complaint against some minority community people”.

The Kokrajhar ABSU also appealed to all people of Assam to stand for an error-free NRC and raise voice against any illegal citizen against whom there is clear evidence.