Demand for immediate repair of the deplorable Tangla-Mahaliapara road, upgradation of Tangla Community Health Centre, probe into alleged anomalies in construction of canal in Kukurakata road 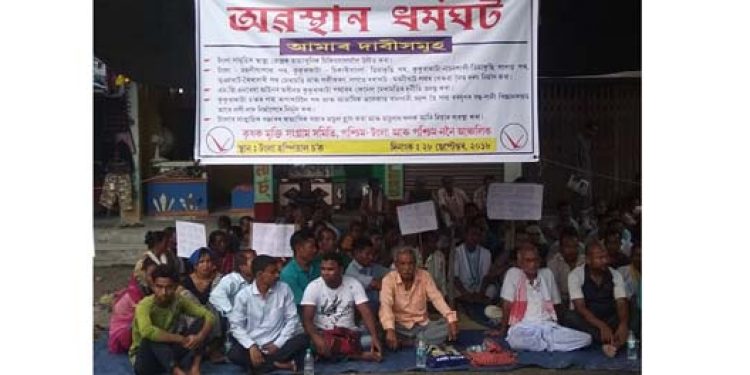 The Krishak Mukti Sangram Samiti (KMSS) staged a sit-in protest at Hospital Road Chowk in Tangla of Udalguri district of Assam drawing the attention of the Government towards various issues plaguing the region on Friday.

The protest was staged at the initiative of the Paschim Tangla and Paschim Nonoi regional units of the Krishak Mukti Sangram Samitti (KMSS) demanding immediate repair of the deplorable Tangla-Mahaliapara road, upgradation of the Tangla Community Health Centre (CHC), probe into the alleged anomalies in construction of canal in Kukurakata road among others.

A number of KMSS activists along with local citizens of neighbouring places while taking part in the sit-in protest vented their anger at State Finance & PWD Minister Himanta Biswa Sarma, BTC chief Hagrama Mahilary and rented the air with high-pitched slogans against the State PWD, Health, BJP Government and Hagrama-led BPF party for their alleged lackadaisical attitude towards resolving the issues of the region.

The speakers urged the State Government and the BTC administration to look into the genuine issues of the region.

The protestors also submitted a memorandum to the Deputy Commissioner of Udalguri through the office of Harisinga Revenue Circle Office, Tangla.