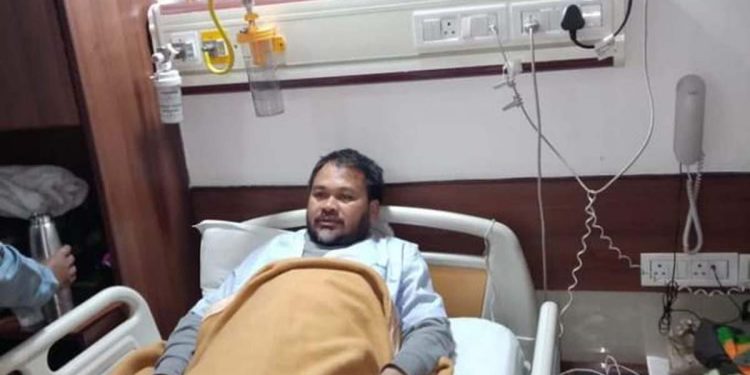 Akhil has been suffering from severe backache, urology problem and several other ailments for over a week now.

The human rights body in its complaint expressed serious concern over the deteriorating health condition of RTI activist Gogoi, who is now lodged in Guwahati Central Jail.

The complaint, lodged by Henri Tipagne of HRDAI from Madurai in Tamil Nadu, was registered with the National Human Rights Commission (NHRC) on Wednesday.

In their petition, Tiphagne and Loitongbam mentioned that Akhil Gogoi was arrested on December 12, 2019, immediately after his speech on the Citizenship Amendment Act (CAA).

Seeking the Commission’s urgent intervention, the human rights defenders said: “Akhil has been long suffering from severe back pain and kidney related issues and was under constant medical observation at the time of his arrest on December 12, 2019.”

Akhil Gogoi was later arrested by the National Investigation Agency (NIA) which brought sedition charges against the human rights defender.

“His health condition, in the absence of proper medical care and treatment, significantly deteriorated and is a serious cause of concern.”

The petition said Gogoi was taken to Gauhati Medical College on February 29, 2020, almost 75 days after his arrest.

He was kept under observation for a day but “no tests were conducted apparently for the clearance from the ‘National Investigation Agency’ and sent back to the central jail.”

He wasn’t admitted to the hospital despite complaining about stomach pain due to urine infection.

“His legal counsels went to meet him in the jail on March 2, 2020, but were not able to meet him as he was down with high fever and severe stomach pain and was not in a position to get up from the bed,” the petition said.

“The counsels got this information from other co-accused in the same case and lodged in the same central jail. Following this, his wife also attempted to meet him in the central jail on March 3, 2020 (yesterday), but given the severity of his health condition, he was unable to meet her,” the petitioners said.

Saying that Akhil is a renowned and committed human rights defender in Assam, the petitions said they know him well who “has taken up issues concerning people’s rights for a long time now”.


“As an act of reprisal for his human rights work”, the Assam Government and the Indian Government on several occasions “have used various provisions of law to implicate him in fabricated cases,” the petition said.

The same was brought to the notice of the Commission on several occasions, it said.

Keeping in view of Akhil’s condition in Guwahati Central Jail, the petitioners want the NHRC to consider directing a team of doctors from the All India Institute of Medical Sciences (AIIMS), New Delhi, to medically examine Akhil Gogoi within a specified period of time and submit its report to the Commission.

They also sought to consider the recommendations of the report and issue appropriate directions to ensure that Gogoi is provided appropriate medical treatment at AIIMS or preferably a hospital outside Assam.

The petitioners also sought the NHRC to consider directing the prison monitor or special rapporteur to visit the Gauhati Central Jail, record submission by Akhil Gogoi and submit the report to Commission within a specified period of time.

The KMSS has also demanded proper treatment to their leader.