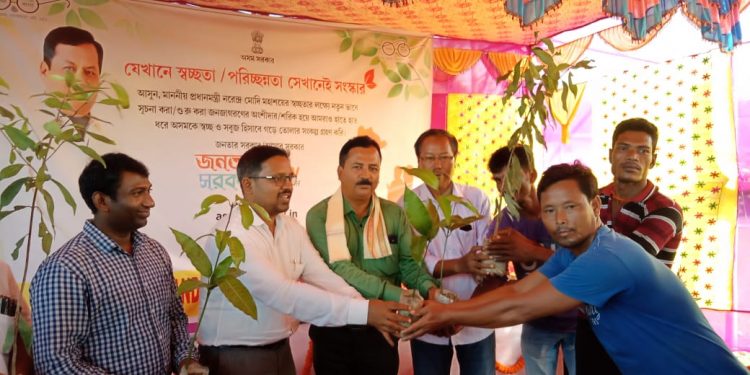 Officials of My Gov of the Govt of Assam along with DC & DFO Cachar with villagers of Khaspur which is set to get a 'Green Village' tag. Photo: Northeast Now

The last official kingdom of the Dimasas, Khaspur, situated 24 kilometres from Assam’s second biggest town, Silchar, is all set to get a major facelift. As part of Government of Assam’s clean and green village initiative, Khaspur, the lone village in Cachar district has been chosen to be the ‘Green village’.

Under the direct supervision of Chief Minister of Assam, Sarbananda Sonowal, a team of officials including Jhulan Mahanta, Himalay Sarma, of Assam’s ‘My Gov’, meet on Friday at Khaspur’s Rajbari in association with the district administration and PHE Division-II to get opinions of the villagers and the hardships that they face in their day to day life.

The villagers were displayed audio-visual clips of the messages of the Chief Minister regarding cleanliness and plantation via video projection in the meeting.

Ram Ranjan Barman, President of Khaspur Dimasa Royal Capital Protection Committee, talking to Northeast Now said, “This place is not only historic but since ages, we have tried our level best to keep the royal legacy intact. We lack a lot of things, like; no proper fencing allows people to enter with foul intentions and creating nuisance in this place. The location and its surroundings have rich cultures and traditions alive and can be a hub for tourism in this region. We are indeed happy that Government of Assam has finally decided to make this place a Green village.”

Local villagers Ratna Chasha and Anil Kol informed the visiting officials that lack of safe drinking water, is a cause of concern, likewise, insufficient toilets has multiplied their woes. The housing schemes too have not been allocated properly.

Replying to the issues raised by these people before the team from Assam’s My GOV which will take the observations and questions back to Sarbananda Sonowal in a recorded format, Cachar Deputy Commissioner, Dr S Lakhsmanan, said “All the points have been noted and action would be taken on a priority basis so that we can transform this village into a green village in the district.”

However, he was quick to inform that despite having a community toilet, if people choose to defecate in the open, the efforts would be spoiled and won’t be a pleasant sight for whoever visits this place from time to time.

DC Dr S Lakhsmanan added that the Divisional Forest Officer (DFO), Sunny Deo Choudhury, who also attended Friday’s meeting, will assist in the plantation drive and around 25 job card holders would be engaged in the entire process under National Resource Management.

Meanwhile, Anand Khatoniar, the brand ambassador from the Department of Forests and Environment of the State Government, known for his plantation strategies, urged upon the local villagers to understand the need for keeping the environment clean and green and cooperate with the government to achieve the results.