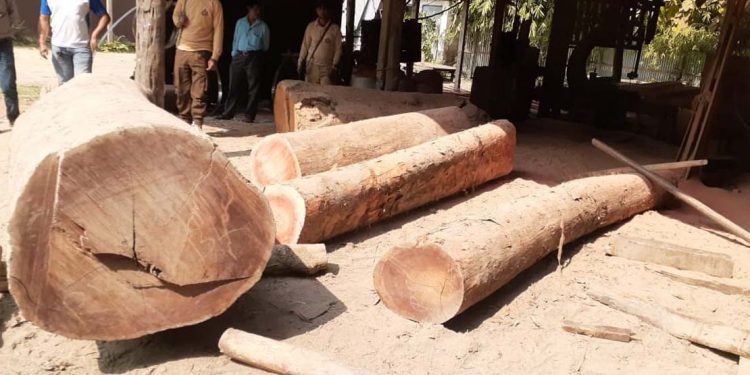 During a joint operation, a team of Dhubri district administration accompanied by forest, and police officials sealed an illegal sawmill and seized a large number of logs.

The village is located along the interstate border with West Bengal.

The team, led by Chiranjit Das, the circle officer of Agomani, from the district administration, was accompanied by forest and police officials.

During the raid carried out on Saturday, the joint team was able to seize valuable timbers and wood-cutting instruments worth over lakhs of rupees on Saturday.

After the raid conducted in the morning, the joint team sealed the illegal sawmill.

“Timbers, logs and two wood-cutting machines worth over lakhs of rupees have been seized during the raid which was conducted following an order for the same by the Dhubri deputy commissioner,” said Chiranjit Das, circle officer, Agomani.

Official sources revealed that the owner of the illegal sawmill, identified as Dipak Ch. Das, has been apprehended as he failed to show any document and give any satisfactory reply to the queries during the operation.

According to media reports, the number of illegal sawmills, timber trade and quarries operating in the nook and corner of Dhubri district has been on the rise for the past few years.

The forest check station in Dhubri detected and seized a total of 47 sawmills, including vehicles carrying timber and quarries in 2018.

The number of detection and seizure of sawmills reportedly went up to 75 till October 2019.