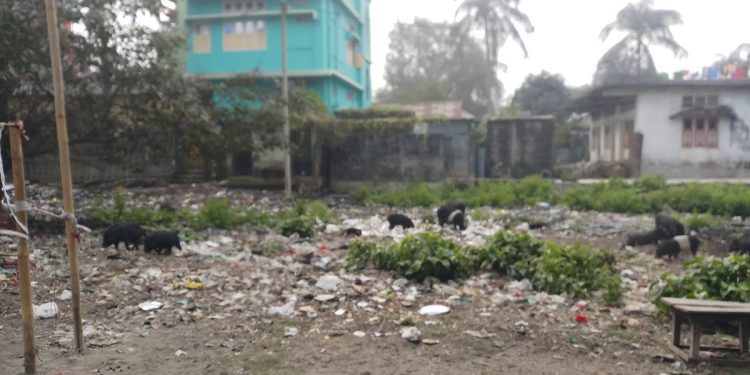 Stray pigs are giving a nightmare to the residents of Assam’s Dhubri town.

Earlier, it was the stray dog and cattle menace, but now pigs have added to the woes.

There is an increase in the population of pigs in the locality.

Worried residents in the neighborhood fear these pigs might spread diseases.

Residents alleged that the pigs roam freely in large numbers across the town.

They also litter the garbage into the streets thereby spreading pollution.

Purno Kr Yadav,a resident of Kalighat Lane of Ward No 11 said, “We are facing this menace since long but sudden increase in pigs in our locality had made thing worse.”

“We have complained many times to the civic authorities about the sufferings caused due to  the uncontrolled and free movements of pigs,” he said.

But Yadav alleged all their pleas have fallen into deaf ears.

Another resident of Ward No 16,  Abhijit Sarkar, alleged that the pig rearers deliberately let loose the animals to graze on streets.

Repeated representations to the authorities have gone in vain, he said.

The demand for finding a solution to the problem is getting louder as the people complain that pigs roam freely across the town.

They said it not only poses health hazards but also damaging property in the residential areas.

“With so many diseases spreading already, the increase of the pig menace is very scary especially with the rainy days ahead,” says Manoj Choudhary, another resident of town.

“We are worried that these pigs could be the carriers of many diseases and infections,” he added.

Although, Dhubri Municipal Board claims there is door-to-door-garbage collection, but despite that, the residents and shopkeepers still throwing their trash out in the open.