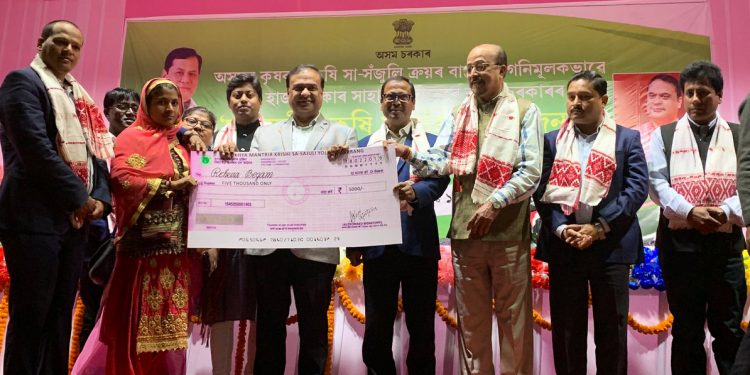 Assam finance minister handing over a cheque to a beneficiary at Mangaldai on Monday. Image - [email protected]

Assam finance, health and PWD minister Himanta Biswa Sarma on Monday launched ‘Mukhya Mantrir Krishi Sa-Sajuli Yojana’ for the farmers of Darrang district and announced a slew of new schemes will become effective from next month.

Sarma, while addressing a public meeting at Mangaldai Gandhi Maidan late in the afternoon here, announced that the BPL beneficiary families, who have been getting rice at Rs 3 per kilo under NFS Act will now get the same quantity of rice at Re 1 per kg.

Moreover, under a proposed new scheme called “Arundhuti”, each girl child going to get ready for wedding will be provided each with a gold of ten grams whereas in another new scheme for a widow, the government will provide an one-time financial grant of Rs 25,000 within one month of the demise of the woman’s husband.

He also spoke on the history of the launching of the farmers’ welfare scheme on January 28, the day of celebration of the ‘Krishak Swahid’ and termed it to be a honour for the peasant martyrs of the historic peasants’ uprising of Pathorughat.

Earlier, Sarma arrived at Mangaldai by a chopper directly from Rangapara and in the evening left for Guwahati by road.