Assam govt to distribute over 40,000 land documents on Jan 28 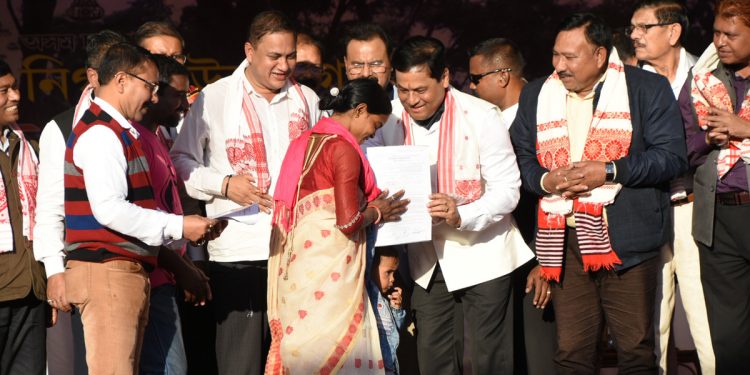 Amid ongoing protest against the BJP-led Assam government over Citizenship Amendment Bill (CAA) across the state, Dispur has decided to hand over land documents to 40,000 landless people.

It was decided in a meeting of revenue and disaster management departments on Thursday at Dispur.

“During the meeting, it was decided that more than 40 thousand landless indigenous people would be provided land pattas on January 28,” a statement released from CMO said.

Chief minister Sarbananda Sonowal directed the department to take appropriate steps to distribute land pattas to more beneficiaries in subsequent phases so that the State Government’s commitment to provide land pattas to one lakh landless indigenous people could be achieved.

The government also decided in the meeting that 160 satras and devalayas of the state would receive 2 lakh annually in addition to the regular annuity they are provided by the state government.

The Arundhati Gold Scheme would be ceremonially launched in first week of March, 2020 whereby beneficiaries of economically weaker section would be given money for purchasing 10 grams of gold ornaments for registering marriage.

Sonowal further asked the revenue and disaster management department to take immediate steps for building material banks in zonal basis from where essential materials like tarpaulins could be provided to flood affected districts in the time of need.