Govinda Basumatary-led NDFB faction to float a non-profit NGO, to be named as Dwimu Foundation 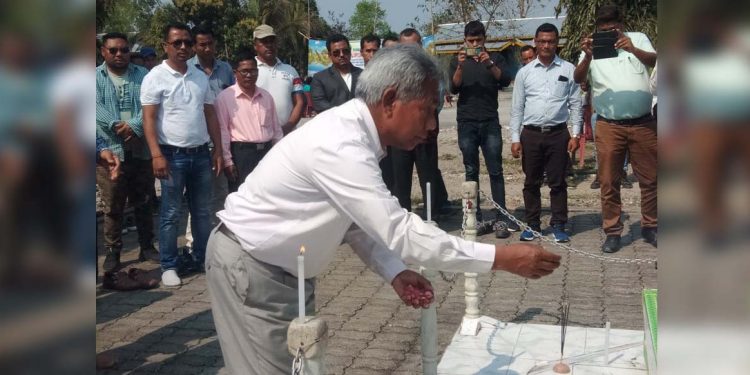 After the three factions of the NDFB including NDFB (D), NDFB(RD) and NDFB(S), the Govinda Basumatary-led faction of the outfit was formally disbanded on Tuesday.

The National Democratic Front of Boroland-Progressive (NDFB-P), led by Govinda Basumatary, was disbanded at the outfit’s Khumguri Western Zone designated camp near Serfanguri in Kokrajhar district on Tuesday.

The faction members disclosed that the group will float a non-profit NGO to be named as Dwimu Foundation, which will work for the cause of the welfare and rehabilitation of all its members.

With the Govinda Basumatary-led faction disbanding itself, all the four factions disbanded themselves.

The three other factions of the outfit, led by Ranjan Daimari, B. Saoraigwra and Dhiren Boro, were formally disbanded on Monday at Sonaigaon designated camp in Udalguri district, 113 km from Guwahati.

The NDFB was founded as Boro Security Force (BSF) on October 3, 1986, in Kahibari of Udalguri district under its founding chairman Ranjan Daimari.

It first entered into a ceasefire with the Indian government in 2005 and in a time-bound manner one after another faction joined the peace talks.

On Monday, the leaders of the three factions of the outfit in a joint statement said after the sturdy struggle, the NDFB had come into the ceasefire and So0 was signed formally with the government of India in 2005 with an aim to resolving long-pending political issues of the ethnic people.

“After the prolonged 12 years of negotiations and dialogue with the government agencies now the issues are resolved on January 27, 2020. Therefore, the three groups of NDFB (NDFB-D), NDFB (RD) and NDFB (S) have agreed and declared dissolution of the NDFB today,” the joint statement said.