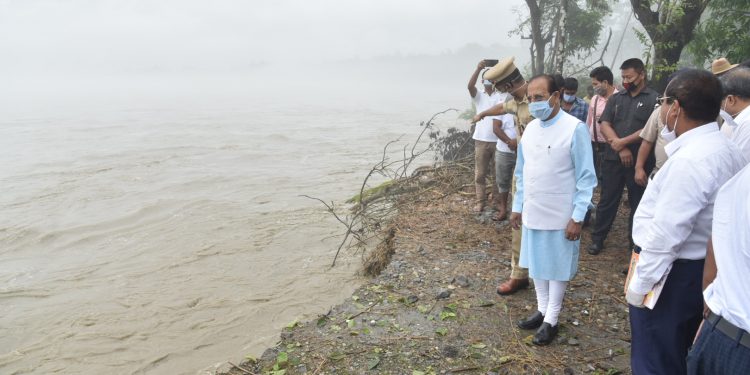 The Governor during his day-long visit, first arrived Safakamar and took stock of the erosion hit road.

He also visited Chunbari and Bispani areas and inspected the erosion affected places and interacted with the people.

He also visited Mathanguri and inspected the entry point of river Beki which causes perpetual flood and erosion every year.

Visiting the areas in spite of inclement weather, the Governor expressed concern over the extensive soil erosion perpetrated by Beki during its meandering course through Barpeta and Baksa districts.

During its total course, the river passes through the State of Assam and causes major soil erosion particularly in two districts namely Barpeta and Baksa.

Due to heavy carrying of silt, the river Beki has been causing huge erosion in both banks since 2004 and continuing even today in different locations.

He said that he will have threadbare discussion with the senior officers of Water Resources department, Soil Erosion department to narrow down the probable causes of erosion and find out scientific solution to this long standing problem.

The Governor also said that since Beki is the trans-boundary river, sometimes heavy rain in upper reaches causes this river to be over flowing, leading to large scale erosion on both sides of its meandering course in Lower Assam districts.

Moreover, Prof Mukhi taking stock of the magnitude of the flood, asked the district administrations of Baksa and Barpeta to expeditiously reach out to the flood affected people and provide them relief. He also made it clear that the people displaced by flood and presently sheltered in relief camps should be given good quality relief materials.

It may also be noted that in the backdrop of seasonal flood, Barpeta Water Resources Division, executed four number of bank protection works were executed at Gamariguri and Safakamar area.

After execution of these schemes the existing State PWD road to Manas National Park from Barpeta Road had been protected from further erosion.

A scheme at Gamariguri area and another scheme for protection of Barapeta Cattle Farm are going to be executed very soon.

Prof Mukhi also said that in line with studying the course of the Brahmaputra, a study shall also be undertaken to find a durable solution to flood and erosion caused by Beki.

He also said that since the conventional methods of giving porcupine, spars etc did not prove to be effective in controlling erosion, some scientific measures need to be developed to tame the river and stop erosion.

For protection of most affected reaches an integrated scheme under ‘Integrated Flood and Erosion Management of Manas and Beki River in the district of Baksa and Barpeta in Brahmaputra Valley within Assam’ amounting to Rs 203.25 crore has been sent to Central Water Commission, New Delhi for technical clearance and proposed for World Bank Funding.

These measures have become a part of the sequel of steps that the government has been taking to find out the durable solution to the flood and erosion caused by Beki river, the Governor observed.

He also said that he would take up the matter with the central leadership in New Delhi in getting the scheme sanctioned.