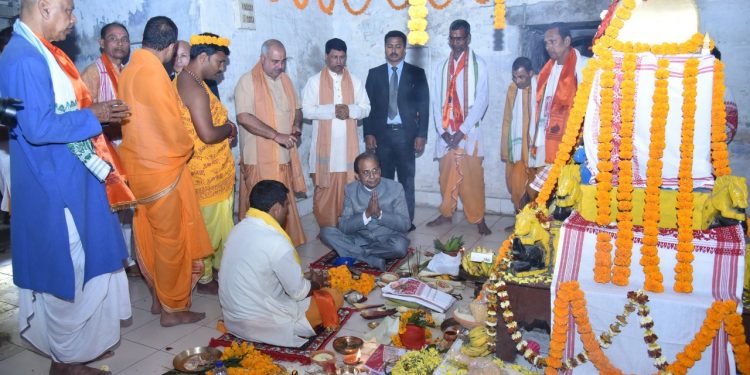 Assam Governor Prof Jagdish Mukhi on Saturday inaugurated the pious beginning of a three day ‘Maha Vishnu Yagna’ at Shri Shri Aswaklanta Temple at North Guwahati and sought blessings for the welfare of the people of the State.

The Yajna is being organized for world peace.

Addressing the programme Prof Mukhi said, “Yagna holds an important position in our society since ages.”

“It is one of the most important rituals in Hinduism and is performed to nip the negative energies in the bud and purify and sanctify the society with positive vibes,” he said.

“The philosophy of yagna teaches us to promote human values and live in harmony with all living being around the world,” he also said.

Governor Prof Mukhi also said Indian culture is the most ancient at the same time very deep-rooted because of its strong link with the religion.

He said through Yajna all creations were made and it leaves a great impact on the minds as the verse or mantra chanted during the Yajna have mind calming powers.

He also said there is a belief that the yajna being performed will contribute to world peace and benefit humanity.

The Governor also said he was happy to be in the temple and considering the archaeological and historical significance of Aswaklanta Temple.

He said temple authority should take appropriate steps to make the temple an attractive tourist destination.