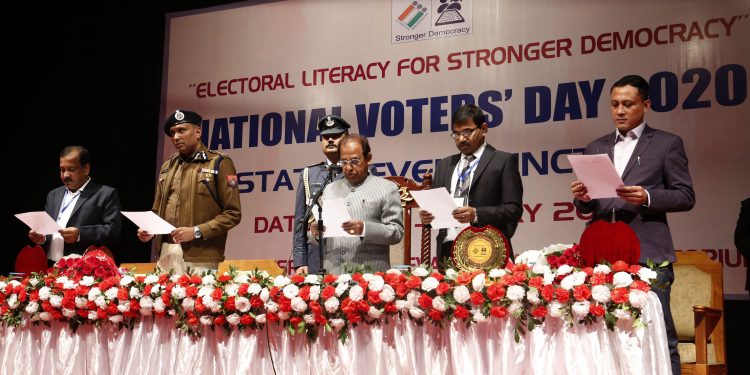 With a view to generate awareness among the young voters for effective participation in the electoral process, Assam Governor Prof Jagdish Mukhi on Saturday called upon the voters of all age groups especially the new voters to exercise their franchise for a stronger, participatory and vibrant democracy.

Attending as the chief guest in the 10th National Voters’ Day organized by the Kamrup Metropolitan district administration at Sri Madhavdeva International Auditorium of Srimanta Sankardev Kalashetra in Guwahati, the Governor said, “National Voters’ Day is an important event of the country as it focuses on spreading awareness among the voters especially the young ones to exercise their franchise and participate in the largest fair of democracy, that is, election.”

“It re-affirms the power of the people to determine their freedom to elect their own representatives,” he added.

Outlining the theme of this year’s National Voters’ Day, 2020 which is ‘Electoral Literacy Clubs for Stronger Democracy’, the Governor said, “As young and future voters constitute a sizeable part of India’s democratic polity and its future, Election Commission of India’s endeavour is to focus on making the future voters electorally literate and enthusiastic to participate in the electoral process.”

It may be noted that the Election Commission instituted Electoral Literacy Clubs or ELCs in 2018 to impart electoral education to young and future voters.

The Electoral Literacy Clubs aims at promoting electoral literacy in all age groups of Indian citizens by engaging them in various interesting activities and hands-on-experience but in an apolitical, neutral and non-partisan manner.

Emphasizing on the importance of ethical voting, Prof Mukhi said that the Election Commission has always stressed upon ‘ethical voting’ which can be achieved only when the voters become enlightened and educated on the election process.

He also pointed out that the theme of the 10th National Voters’ Day which aims at achieving the goal of ethical voting and carries the message for free and fair poll should be spontaneously celebrated by all and sundry.

The Governor also called upon the eligible citizens to register as voters and vote with pride and urged the members of ELCs to promote the value of ethical voting participation in the electoral process among all sections of the society so that the nation would continue to grow in strength and vibrancy.

Chief Electoral Officer Mukesh Chandra Sahu congratulated all the eligible voters and said that voting gives an opportunity to be a part of decision-making which affects the life of everybody.

He also urged upon all to cast their votes imperatively.

Synchronizing with the day the new voters were presented commendation in recognition to their becoming the eligible voters of the country.