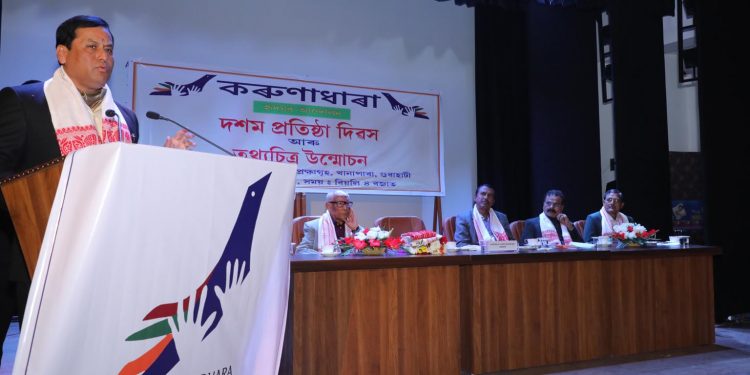 “Every citizen must take up the responsibility along with the government to provide social and economic security to the Divyangs,” said Assam Chief Minister Sarbananda Sonowal.

“This should be done so that they could live a life of dignity,” Sonowal asserted.

He was speaking at the 10th foundation day programme of Karunadhara Trust in Guwahati on Wednesday.

“The state government would provide appropriate lands to the Trust in Guwahati for setting up shelter homes for Divyangs,” Sonowal further said.

He also appreciated the role played by Karunadhara Trust for working towards providing succour to the disadvantaged sections of society.

Sonowal further said that the Assam government has been resolutely working towards providing a life of dignity to the Divyangs.

“This commitment has been exemplified by the setting up of the country’s only ITI for the Divyangs in Dibrugarh,” Sonowal reiterated.

The CM also highlighted the state government’s initiatives to provide Rs 1000 per month to the Divyangs, giving employment to 663 Divyangs.

He also informed about state government’s willingness to set up a university for the Divyangs.

He also assured of looking into the request of Karunadhara Trust for a corpus fund.

Later, the CM also released the documentary on the works of Karunadhara Trust made with the financial assistance of Oil India Limited and directed by Charukamal Hazarika.