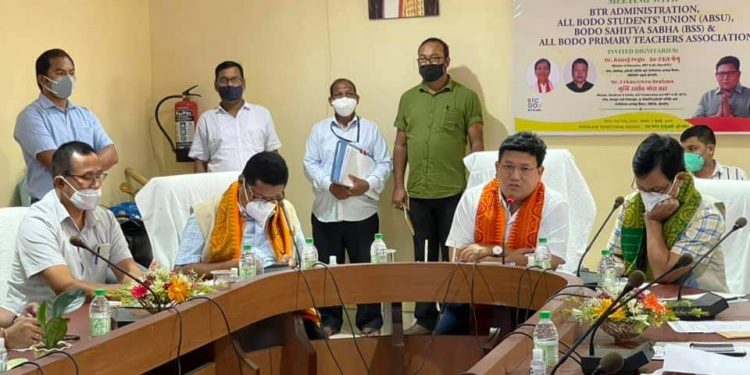 Ranoj Pegu said that he had a fruitful discussion with various Bodo organizations on issues pertaining to Bodo medium education.

“I have taken note of the issues, which will be resolved through discussion so that the Bodo medium can be developed,” said Pegu.

“We will also conduct a special TET exam to fill up the vacant posts of teachers in Bodo medium schools,” he further said.

On inclusion of the Bodo language in the Assam judicial service as per the Assam Official Language Act, 1960, (Amended Act, 2020), Pegu said the matter will be resolved after discussion with Assam chief minister Himanta Biswa Sarma.

“We are grateful to the Assam government for taking the initiative to resolve the various long pending problems of the Bodo medium educational institutions,” said ABSU president Dipen Boro.

The ABSU also submitted a 22-point memorandum before the education minister.

The minister also held a meeting with vice-chancellor of the Bodoland University, Laishram Laddu Singh and visited the Central Institute of Technology in Kokrajhar.

He also visited the “Bodofa House” office of ABSU.