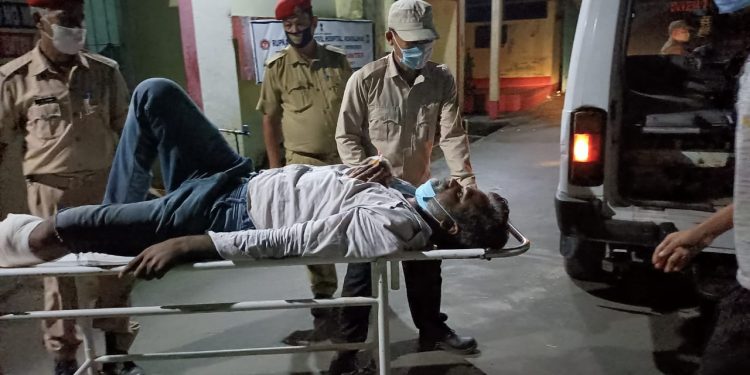 The injured cattle smuggler being taken for treatment to Barpeta

A cattle smuggler was injured in a police firing on Saturday after he had tried to flee from police custody at Sukhanjhora area under Fakiragram Police Station in Assam’s Kokrajhar district.

Kokrajhar additional superintendent of police Surjeet Singh Panesar said that the cattle smuggler identified as Sorangi Chinna, was injured in police firing while trying to flee from the police custody on Saturday morning.

Chinna is a resident of Visakhapatnamin in Andhra Pradesh.

He was taken to Sukhanjhora area to identify the house of a co-accused person when he snatched a pistol from a policeman and tried to flee.

The police had to fire to prevent him from escaping.

The accused sustained a bullet injury in the leg and was taken to the Fakhruddin Ali Ahmed Medical College and Hospital in Barpeta.

Doctors at the hospital pronounced him to be out of danger.

So far the police have arrested 12 persons involved in international cattle smuggling/syndicates and are vigilant against any anti-social activities.