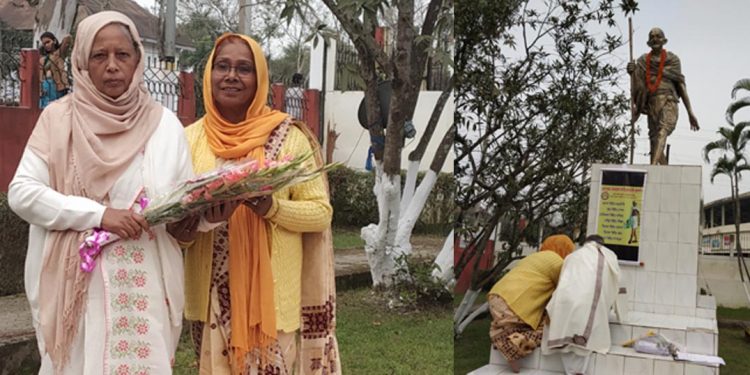 The Gandhi Park at Jorhat wore a deserted look on Martyrs Day on Thursday.

The metal statue of Mahatma Gandhi inside the park looked down forlornly on the handful of people who gathered to pay homage to the ‘Father of the nation’ on the day when he was murdered by Nathuram Godse in 1948.

The Mahapurush Madhavdev Foundation, which organised a programme at the park in the centre of Jorhat town to commemorate the sacrifice of soldiers and the death of Mahatma Gandhi, invited the principals and students of several schools in the vicinity of the park but no one turned up.

While the ‘no turn up’ was attributed to the rollover of Saraswati Puja, the organisers were disappointed that the principals did not depute a single teacher with at least a few students.

“We try to instil the ideals of Gandhi when they are young and that is why the school children were invited to perform prayers,” Ratul Baruah, secretary of the Foundation said.

He further said permission was granted by the deputy commissioner through an SDO to invite the three schools.

The administration also helped with chairs, a loudspeaker and carpet for the children to sit, all of which remained empty.

The chief guest on the occasion, Mallika Rahman, spoke at length on what had inspired Gandhi and a few little known facets of his life.

She said today’s parents and teachers do not seem to have the same high regard for Gandhi or as much knowledge of the ‘Father of the Nation’ as the past generations.

Another speaker, Rajat Borthakur, was more open in his condemnation stating that in today’s India Gandhi’s contribution to the nation’s freedom from foreign rule seems to be getting sidelined and that he has been given lesser space in school texts.

“We must uphold his ideals and dreams of India as best as we can,” he said.

Sailen Nath, a musician of yesteryears, was of the opinion that the time was ripe to remember the humanitarian songs of Bhupen Hazarika like Manuhe Manuhor Baabe ….

A resolution was adopted by the Foundation to felicitate little-known social workers working in remote villages during the celebrations of Gandhi’s 150th birth anniversary on October 2.

The resolution was initiated by felicitating Malika Rahman who has built Sarothi, a home for widows and destitute women at Lichubari here giving them a means of sustenance.

At the outset, an earthen lamp was lit at the base of the statue by writer and poet Deben Tasa, a bhajan was sung by Kuoli Goswami and the president of the Foundation and former principal of Bahona College, offered the vote of thanks.