Stamps on Mahatma Gandhi sold out in Mandalay 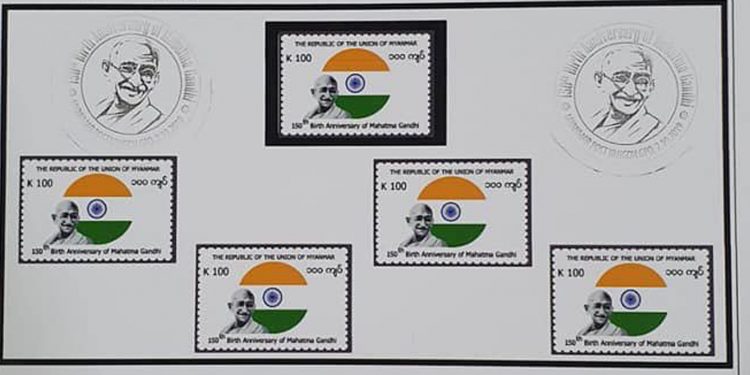 The stamps, which were released to mark the 150th birthday of India’s ‘Father of the Nation’ Mahatma Gandhi, were sold out a few hours after the Mandalay Post Office in Myanmar started selling them o Tuesday.

According to media reports, the commemorative stamps were released at the main post offices in Yangon and Nay Pyi Taw the same day.

A Myanmar Times report quoted 68-year-old U Soe Myint Thein, who has been collecting stamps since he was 13, as saying that he was able to collect a few stamps which included a folder and a postcard.

He informed that when he left the post office, all the stamps were sold out.

The report quoted philatelist as saying, “I bought 15 packages of stamps, first day covers and postcards.”

“But within 30 minutes the stamps were sold out and I was not able to buy more for my friends,” he further said.

It has been reported that similar situation was also witnessed in the main post office of Yangon.

The report quoted a collector of stamps as saying, “The commemorative stamps were sold out in Yangon by 1 pm.”

According to the report, 50,000 stamps were sold out in the Mandalay Post Office.

The report quoted Daw New Ni Aung, an official at the Mandalay Post Office, as saying that apart from 50,000 stamps, on Tuesday they sold 100 first day covers and 700 postcards.

The report quoted Nandan Singh Bhaisora, consul general of India in Mandalay, telling media persons that the commemorative stamps honoured the ideals espoused by Mahatma Gandhi, who is a global peace icon.

On the other hand, Daw Nu Nu Than, the deputy general manager of the Nay Pyi Taw post office, said, “The stamps express the wisdom of Mahatma Gandhi.”

It may be mentioned that Mohandas Karamchand Gandhi, popularly known as Mahatma Gandhi, who led India’s freedom struggle, was born on October 2, 1869 at Porbandar town in Gujarat.