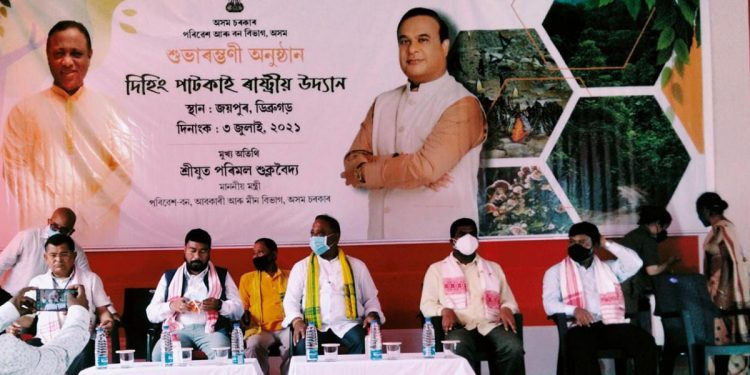 Inaugurating the seventh national park of Assam at a function held at Jeypore Forest IB, minister Suklabaidya said it’s a red letter day for Dibrugarh and Tinsukia districts and Assam as a whole that Dihing Patkai National Park has come up.

He said following the declaration of Dihing Patkai as a national park on World Environment Day on June 5 by Assam chief minister Himanta Biswa Sarma, the official process has been completed with the publication of the notification on June 15.

The forest minister said a long drawn out conservation movement for making Dihing Patkai as national park has come to fruition and thanked the people of Jeypore for making it happen.

Suklabaidya said the rich floral and faunal diversity of the park well known for its rainforest will soon attain the stature of one of the best national parks in the country.

He said Assam is blessed with nature’s bounty and lauded the people of the state for the conservation of nature.

Suklabaidya called everyone to live in complete communion with nature that ‘provides us sustenance and keeps us alive’.

The minister said during the beginning of the new government, two national parks including Raimona National Park have come up in the state.

He said with the national park recognition accorded to Dihing Patkai, the conservation of the rich flora and fauna would get a big boost.

Suklabaidya said that the government would take necessary steps for infrastructure development of the park to attract tourists. He said the park will open up vistas of opportunities for the unemployment youths.

Union minister of state for food processing industries, Rameswar Teli thanked the government of Assam and Nature’s Beckon for making people’s dream come true by according Dihing Patkai with the national park tag.

He hoped that the national park would get a state-of-the-art guest house and other facilities to woo tourists.

The Dihing Patkai National Park, which falls under the Jeypore range and Soraipung range of Dibrugarh and Tinsukia districts, covers an area of 234.26 sq km.

Known all over for its rainforest, the last remaining stretches of Assam Valley Tropical Wet Evergreen Forests, the park is home to elephants, hoolock gibbons, golden cat, clouded leopard and other animals.

Till date, 47 mammal species, 47 reptile species and 310 butterfly species have been recorded.

“Our organisation has fought hard to showcase the Dihing Patkai as one of the rich treasure trove of the world. We are happy with the decision of the government,” he added.

Earlier, the minister handed over the formal notification of the park to the people’s representatives and the Nature’s Beckon director.

Suklabaidya also unveiled the plaque at the main entrance of the park.

He also went for a safari inside the park with park officials.