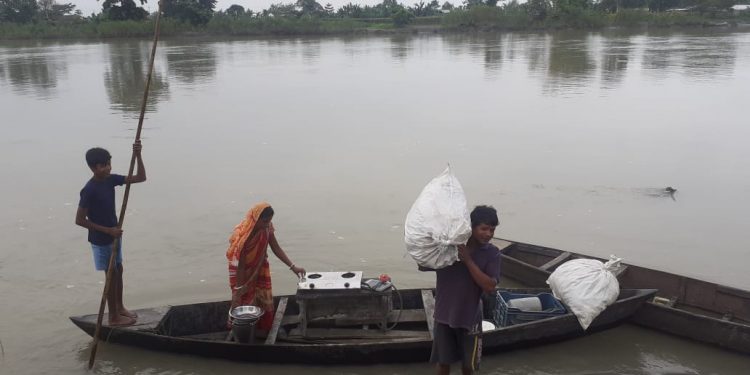 As the second wave of flood hit Assam, the Brahmaputra river was flowing above the danger level in Dibrugarh on Monday.

The river was flowing at 105.79 metre against the danger mark of 105.70 metre in Dibrugarh while the forecast was a rising trend in the next 24 hours.

Many areas of Dibrugarh were affected in the second wave of flood which brought miseries for the poor people.

Every year, the people of these particular area have to faced the wrath of flood and erosion.

“Like every year, this year too flood brought miseries for us. Our village Rongmola was wiped out into river. Every year during flood, the people take refuge to a highland at Rongmola but this year the entire area was washed away in river. There are more than 95 families taking shelter near a land to Sadkotta tea estate but now the area was flooded. Some of them are going to relief camps. Every year, we are facing the same problem but government has failed to find out parmenant solution of flood and erosion,” said Shymal Das, a resident of Rongmola.

Among the schemes are flood and erosion control measures in various areas of Dibrugarh district including Rohmoria, Bindhakota, Mulukgaon as well as reconstruction of flood damaged government buildings, homes, embankments and PWD roads.

As many as 83 PWD roads, 35 roads under Dibrugarh Municipal area, 65 roads under Zila Parishad area were damaged in the floods.

Moreover 294 cattles and other livestock had died in the recent floods.