The family members of Arnab Kishore Bordoloi has written to the OIL CMD demanding answers to several questions related to his electrocution at the Baghjan blowout site.

Bordoloi was a junior electrical engineer at Oil India Limited (OIL) and he was electrocuted in Baghjan oil well on September 9.

“We have questions and if not answered to our satisfaction, please be aware that we will come and fight with all might and force,” the letter to the OIL CMD read.

“So before we start, we would request you to be transparent about the whole fiasco,” it added.

“We would like to officially demand the CCTV footages of the site entrance and if there was a CCTV at the location of the accident along with all the details of the entry at Baghjan site- timing, purpose etc,” the letter added.

“On What grounds, the young engineer was sent to work on such a dangerous condition all alone?” the family of the late engineer further asked.

“Does other Senior Engineer work on such line work?” the further asked.

“Have any of your senior officials worked on such equipment before and if not, where did our son/brother/nephew was trained to work on the equipment?” the letter added.

In the letter, which has been countersigned by his father Bijit Kumar Bordoloi, further, asked the OIL CMD as to how did his phone was found on the accident site and was damaged when they were aware of the fact that the late engineer had submitted the phone at the entry gate?

“We would also like to know if Oil India had any standard operating procedure and safety guidelines and briefing to the deceased before he was sent. Was he guided accordingly?” they asked.

“Most importantly, what is the cause of death? What led to such an extreme situation? If he was found unconscious on site, for how long was he lying unconscious or unattended?” the family further asked in the letter.

“Duty timings at Baghjan site are reportedly from 7 am to 3 pm and on the day of the accident, he had to deliver a presentation” the letter further stated.

“Then why was he sent to the site later? Was it a forced last minute order that he could not decline? Why were the timings changed abruptly,” the letter added.

In the earlier part of the letter, the family expressed their grief for OIL not having any official communication with the family so far.

“No zeros in a number can compensate for what we have lost,” the letter by the family to OIL CMD stated. 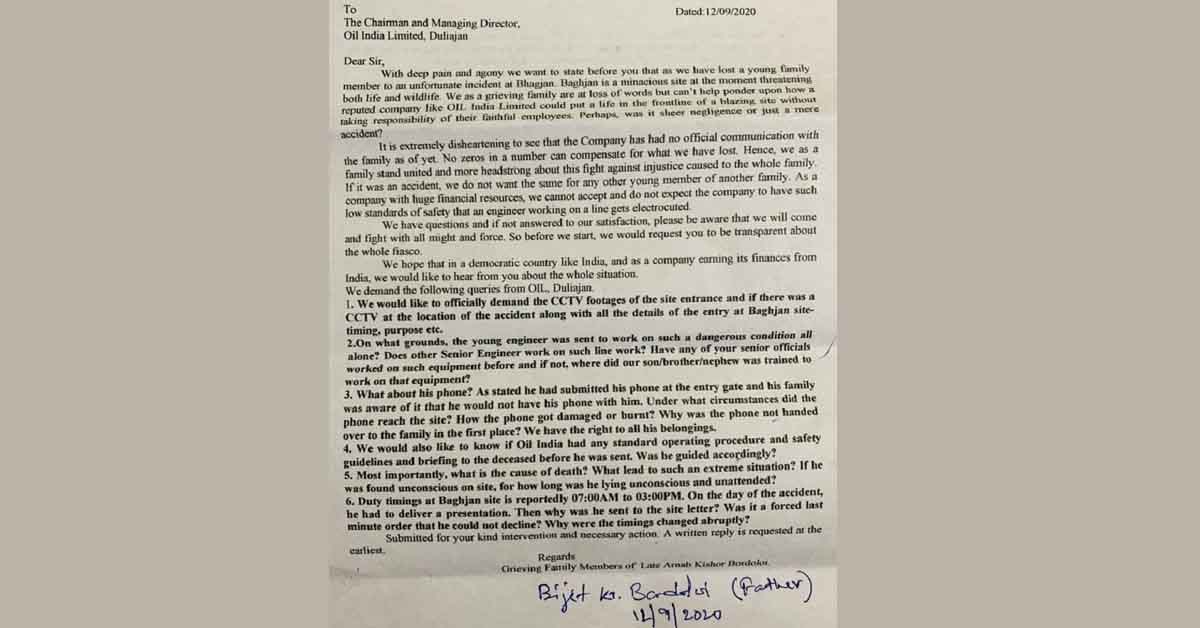