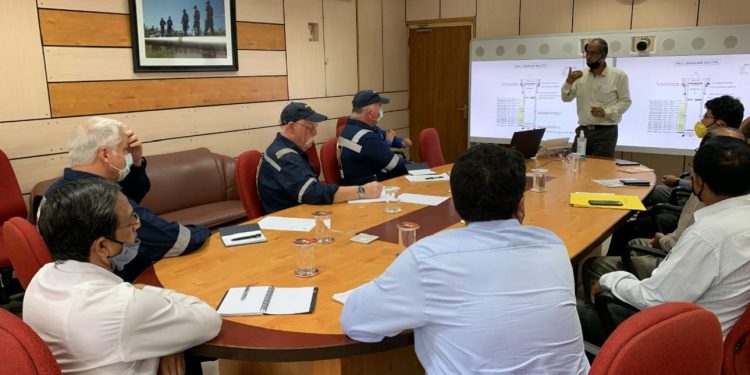 A three-member team from the Singapore based firm M/s Alert Disaster Control reached Duliajan on Monday to take stock of the situation that has arisen due to the blowout of Baghjan gas well in Tinsukia district.

A meeting was convened by RCE, OIL at Duliajan where the experts were briefed by representatives of OIL about the progress in the oil well control operation.

After the preliminary discussion and debriefing session, the experts along with the OIL team left for Baghjan well at around 12 noon.

“The experts from Alert complimented OIL for all the preparatory works carried out so far and mentioned that based on their wide experience of handling over thousand blowouts in around 135 countries all over the world under different conditions they are confident of controlling the well at the earliest with necessary support from OIL,” an OIL press release stated.

“They emphasized that safety of the local people in the area and the technical team working at the well site will be their prime concern while carrying out the operations,” the release added.

On May 27, 2020, the production well of Baghjan 5 under Baghjan Oil field of Oil India Limited in Tinsukia blown out while workover operation were going on.

“Both vertical and horizontal lift mechanism of the Hydraulically Driven Mechanical Transporter to be used for Well Control Operation have been completed and tested,” said an OIL official.

“The final assembling process is in progress. Composite arrangements for subduing (killing) the well is in progress,” the official added.

“Clearing the site of operation is in progress,” the official added.

“Digging of water reservoir and preparation of placement of high capacity water pumps are in progress,” the official said.

“Environmental impact assessment study and bioremediation process are in progress. NDRF team is assisting the relief operation,” the official added.

Locals of the area, however, protested against OIL for destroying the biodiversity of the region.

The area where the incident happened falls under Dibru-Saikhowa National park and after the incident, it has been reported that many animals died due to the leakage of gas and Oil for the site.

“Due to constant leaking of gas and oil after the disaster at Baghjan, the  Maguri Beel under Dibru-Saikhowa National park has been affected,” said Nirantar Gohain, an environmentalist.

“The constant leaking of oil and gas has been posing a serious threat to the lives of animals,” Gohain added.

“So far, many animals were reportedly died after the incident,” he added.

Meanwhile, environmentalist and nature’s lovers have launched a campaign in social media to ‘Save Maguri’ beel.

Maguri beel is one of the largest wetland in Dibru-Saikhowa National park which is famous for migratory birds and various types of fish.

The wetland is facing threat due to the disaster at Baghjan oil well.