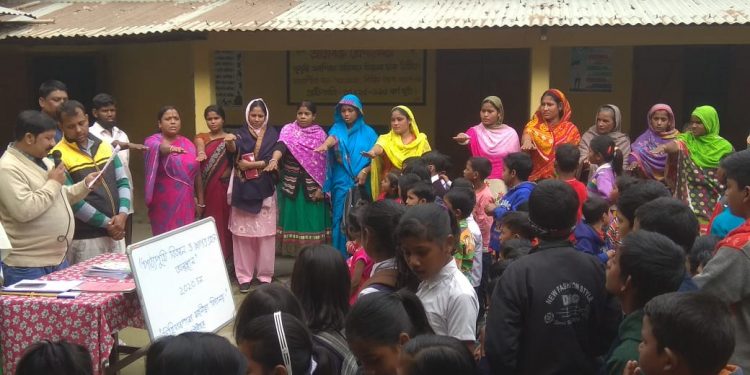 It is an enrollment campaign with special innovation of Piramal foundation naming ‘Amar Bidyalay, Amar Abhiman 2.0’.

It started on December 27 last 2019 across the district.

On January 2, students of four schools of Majerchar-1 cluster of Gauripur Education Block, Dhubri came out with a social and education awareness rally.

They went to Majechar Chalakura Lower Primary School from their different respective schools and assembled together and thereafter, a massive rally came out and they went through the dusty lanes of the Char and the adjacent villages sloganeering with placards and banners prepared by them and the district administration.

The teachers went house to house to bring community participants in the rally.

The similar initiative was also taken in the schools of the other corners of the cluster viz 342 Dewani Para LP School, 10 Arabi Pub Majerchar LP school as informed by Tanima Narayan, district representative of Piramal Foundation.

It is worth mentioning that in the first version of Amar Bidyalay Amar Abhiyan, the Dhubri district in Lower Assam has registered a record increase of 18 per cent in student enrolment in public school for the first time since 2016.

On December 24, Ananta Lal Gyani, deputy commissioner, Dhubri officially launched the campaign in the presence of all concerned district officials and school teachers as well as parents.

The campaign has fixed the target to achieve 100 per cent transition rate and 70 per cent student learning outcome focusing on basic skills on mathematics and Language in the district for the current academic year.

The abhiyaan will be ended on January 9 next.