B Saoraigwra claims 99.9 pc of the members of his disbanded faction are with him 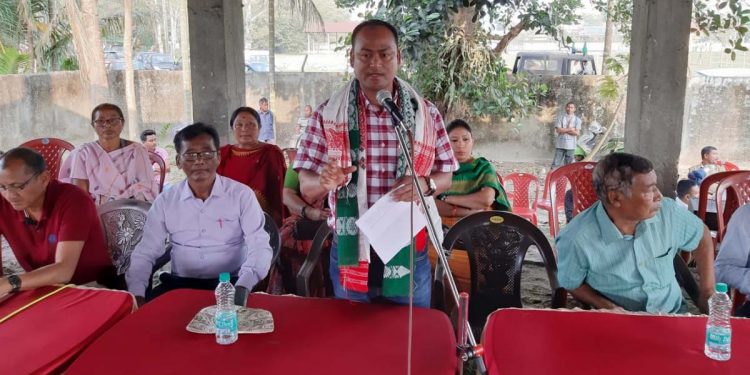 Former NDFB(S) chief B Saoraigwra addressing a gathering during the joining ceremony of BPF in Chirang on Thursday. Image credit - Northeast Now

The joining ceremony was organized at Kachikutra in Chirang district.

Talking to media persons after joining the BPF, the former rebel leader said, “If I get the privilege, I will do whatever is good for the public.”

He added that he would try to keep up the hopes and aspirations of the people of the Bodo belt.

In response to a question on his fellow NDFB (now disbanded) leader B.R. Ferrenga, who served the out as the general secretary, joining the UPPL, Saoraigwra said, “In a democracy everyone has the right to have a different choice.”

However, he claimed that 99.9 percent of the members of his disbanded faction are with him, hinting at a strong backing towards the ruling party from the former rebel group in the forthcoming BTC polls.

Earlier after joining the UPPL, BR Ferrenga said, “I believe that Saoraigwra will come forward by keeping aside all his personal issues and join the UPPL.”

No other former cadres of the disbanded NDFB(S) joined the BPF along with Saoraigwra on Thursday. However, he said the other cadres of his faction would join the ruling party later.

It may be mentioned that the former NDFB leaders have been divided over their political journey. While Dhiren Boro and B Saoraigwra have joined the BPF, former general secretary NDFB(S) BR Ferrenga and NDFB(P) chief Govinda Basumatary have joined the Pramod Boro-led United People’s Party Liberal (UPPL).

The joining ceremony of the BPF was also attended by BTC deputy chief Kampa Borgoyary.

According to sources, S Saoraigwra will contest the BTC poll from the Chirang council constituency.