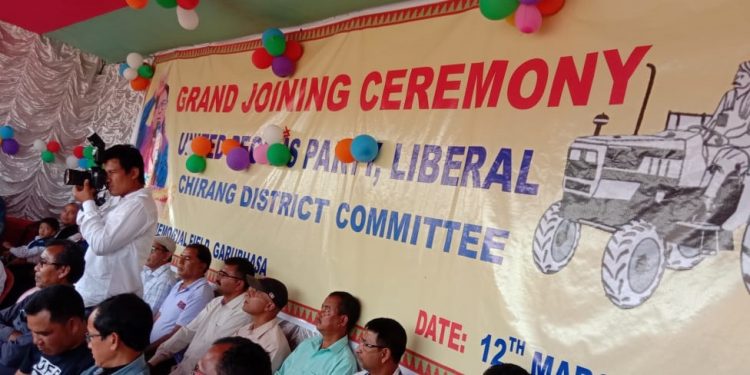 A view of the UPPL's joining ceremony in Chirang on Thursday. Image credit - Northeast Now

In poll-related violence, an election office of the United People’s Party Liberal (UPPL), led by Pramod Boro, was torched by miscreants in Chirang.

The incident took place on Wednesday night a few hours after the announcement of the date for Bodoland Territorial Council (BTC) poll on Wednesday.

After the incident, a high-level police team rushed to the spot and started an investigation.

However, no one has been arrested by police in this regard.

The incident has been vehemently condemned by Kajalgaon MCLA Roungwra Narzary and demanded proper inquiry into it.

Meanwhile, more than 300 former National Democratic Front of Boroland (NDFB) cadres joined the UPPL during a ceremony at Garubhasha in Chirang district.

The UPPL organized a huge gathering in the public field of Garubhasha under the 13 No Chirang council constituency to welcome the former NDFB cadres and others to the political party.

The joining ceremony was attended by UPPL president Pramod Boro as the chief guest.

Among the prominent other leaders present at the ceremony include UPPL’s founding president UG Brahma and former NDFB general secretary, who newly joined the UPPL, BR Ferrenga.