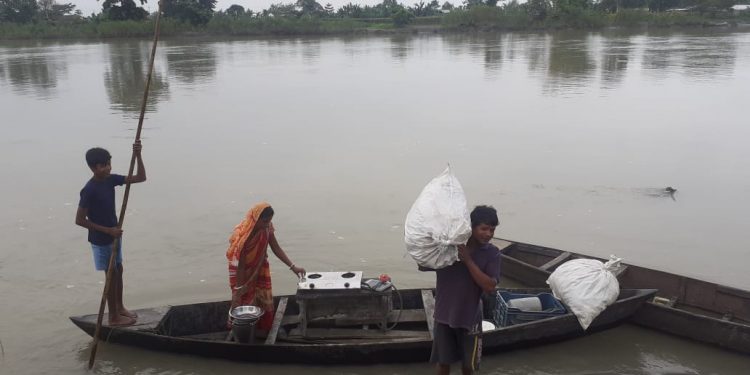 Every year due to erosion, Dibrugarh in Upper Assam loses huge chunks of land.

This year too Brahmaputra and Dibru river had eroded large chunks of land mass under Chabua revenue circle in Dibrugarh.

“The concerned authorities have never paid interest to the numerous applications and petitions to solve the problem of erosion in the area which has continued unabated since 2010. Although, some short term measures were taken they were mostly unsuccessful due to unscientific implementation and also due to alleged large scale corruption in implementation of these anti-erosion projects,” a villager alleged.

“Erosion has started in the area since 2010 and our huge cropland was washed away. Every year we have to face the similar problem. We have to stay in relief camps during flood. Our village have shrinked due to erosion and  the government has failed to solve the vexed issue,” said Narayan Pegu, 56 years old  villager of Tengabari Mirigaon.

It must be noted here that the chairman of Assam Hydrocarbon and  Energy Company Ltd,  Punakan Baruah who is also the President of Dibrugarh district committee of AGP visited the site and interacted with the villagers.

He assured that he will take up the matter with the state government and chief minister Sarbananda Sonowal for adequate relief and rehabilitation package for the affected villagers.