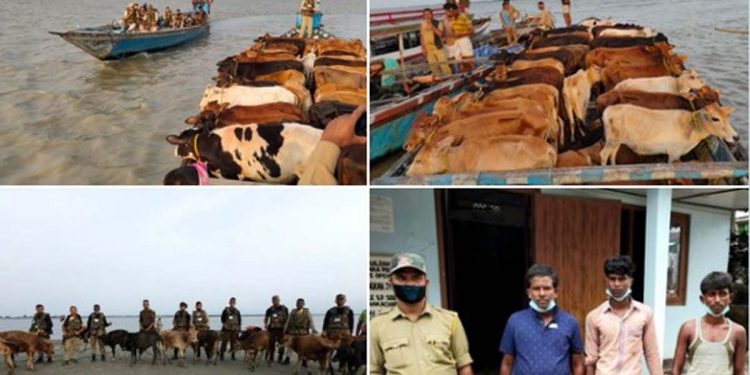 In the special drive launched against cattle smuggling, the police were also able to arrest 3 cattle smugglers from the spot and seized one boat.

The disturbing trend of smuggling of cattle from hinterland to Bangladesh through Dhubri-South Salmara Mankachar route continues unabated.

Acting on specific inputs, the police of two districts – Dhubri and South Salmara Mankachar – launched a special drive and worked in tandem recovered a total of 56 cattle heads.

It is suspected that the cattle smugglers were planning to smuggle the cattle heads to Bangladesh via the Indo-Bangladesh border through river route.

The night-long operation in river water under testing conditions of flooded Brahmaputra river was launched by Dhubri Police on the basis of a secret input.

After chasing a boat carrying cattle for almost an hour it was intercepted with the support of South Salmara Police and 44 cattle heads were successfully recovered.

The police were able to recover 12 cattle heads from river water and took them to their safe custody; however, the culprits somehow managed to escape from the spot with the boat.

Dhubri superintendent of police Ananda Mishra said the cattle along with a boat were seized following legal procedures and a case has been registered (253/2020) under relevant sections of the IPC at South Salmara police station.

Further investigation is on, the Dhubri Police chief said.

All of them are residents of Porarchar village under South Salmara police station in Dhubri district.